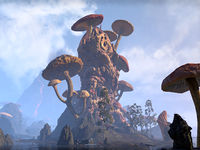 "The Telvanni decided to honor me with membership in their great house. This tower was their idea of a gift. Their choice of location was... portentous, let's say. For them. My own auspices are far brighter.." — Divayth Fyr

Tel Fyr was a remote Telvanni Tower, located directly south of Tel Aruhn and southwest of Sadrith Mora, on an island just off the mainland. Although it had a dock, it was not on any transport route, and the only real means of getting there was to swim from Tel Aruhn or Sadrith Mora. It was also possible to walk through Molag Amur from Molag Mar, but this was a significantly longer route. Unlike most of the other Telvanni towers on Vvardenfell, most of Tel Fyr was built into a large hill, as opposed to being a free-standing organic growth.

Its main resident, Divayth Fyr, was proof of the Telvanni maxim that rank is insignificant next to the power to do whatever one desires. Divayth was not generally addressed as "Lord Fyr" and was not a member of the Council (despite invitation), but he was nevertheless one of the most significant and powerful of the Telvanni Lords.

Around 2E 582, as Divayth was expanding his tower of Tel Fyr into Abanabi Cave, a gateway to a part of Sotha Sil's Clockwork City, known as the Halls of Fabrication, was discovered. Divayth Fyr and a group of Telvanni mages tried to make their way to the gate but were stopped by the clockwork god's fabricants. Divayth Fyr therefore enlisted the Undaunted to destroy the fabricants and let him explore the Clockwork City. The plan succeeded, and the gate was likely sealed afterwards.[1]

In the Third Era, Divayth Fyr had turned his back on most of the affairs of men. He converted most of Abanabi Cave into the Corprusarium, a place where he experimented with the Corprus Disease. Whether the Corprusarium was a compassionate endeavor or simply a good means of gaining experimental subjects, it still was a place of value to all factions and segments of Morrowind society who wanted an alternative to simply killing family or companions who contracted the dreaded disease.[2]

It is unknown how Tel Fyr was affected by the cataclysmic Red Year and subsequent Argonian invasion of 4E 5.