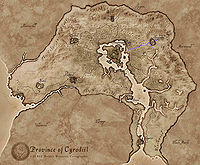 Map showing the route of the Blue Road 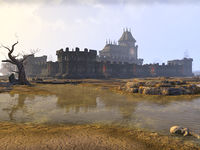 The Blue Road runs east to west between the Imperial City and Cheydinhal in the province of Cyrodiil. The road continues on east past Cheydinhal, into the foothills of the Valus Mountains.[1] It also branches south of Cheydinhal, towards the settlement of Harlun's Watch.[2]

In the Second Era, a military stronghold known as Blue Road Keep was located on the Blue Road, among the volcanic hot springs found between Cheydinhal and the Red Ring Road. During the Alliance War of 2E 582, Blue Road Keep was an expansive and strategically important keep. It had its own farm, mine and lumbermill, and was heavily fortified. It was initially located within the territory held by the Ebonheart Pact, and its strategic position proved vital for any potential capture of the Imperial City. The keep changed hands many times over the course of the war.[3]

By 3E 433, nothing remained of Blue Road Keep or the surrounding hot springs.[2]