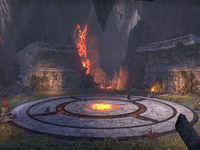 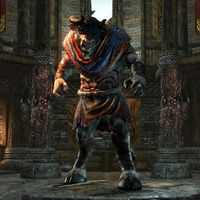 It is said that long ago, Hircine aided in the creation of the ancient Keptu[1] forge known as the Bloodroot Forge, nestled in a secluded valley bordering the Jerall Mountains and the Craglorn region of Hammerfell.[2][3] The forge itself was built for the purpose of harvesting Nirncrux, and it was said to rival the ingenuity of the Ayleids and the Dwemer.[4] The forge would later be abandoned, and would be shunned by the neighboring Nords as a place of evil, one where the Nedes worshipped dark and forgotten gods.[5]

Sometime during the early years of the Interregnum, Gherig Bullblood's Reachmen clan followed the signs laid by their Crow Mother for 30 days and nights, tracing crow-picked corpses through the Jerall Mountains, until finally, Hircine revealed to them his champion.[6] The champion was the minotaur known as Domihaus the Bloody-Horned, who grabbed Gherig by the neck, taking from him his pendant, which indicated that he was a descendant to the Keptu clan. Noting his heritage, Domihaus began a chant, making the stones reshape, and initiated a blood ritual which both Domihaus and Gherig took part in. This ritual linked Gherig to the home of his ancient ancestors, a home which called to him to rediscover it. With the union of blood, Gherig's clan was reborn as the Dreadhorn clan, which revered Hircine through his champion Domihaus,[7] whom the clan hoped would lead them to reclaim the lands their ancestors lost to the Nords.[6]

The Dreadhorn clan traveled to Craglorn and discovered Hircine's Boon, the Bloodroot Forge, and began to work it. Any settlers near the area were either sacrificed or enslaved, and forced to mine Nirncrux to feed the forge. Weapons of great power were created using the forge,[3] and the Reachmen turned themselves into the Blood-Forged. These abominations are comparable to Briarhearts, but their creation instead involves a nirncrux heartstone being used in place of a briar heart,[8] resulting in a being that is an amalgamation of blood, nirncrux, and iron.[9]

By 2E 582, the Dreadhorn clan were greatly emboldened by the Bloodroot Forge, and Domihaus led an attack on Falkreath Hold. Gherig Bullblood remained in the forge to continue creating terrible weapons. The threat of the Dreadhorn clan grabbed the attention of the Undaunted, which led to an assault on the forge, and the death of Gherig Bullblood.[10] However, the forge called to all that within its boundaries to dwell in crazed and feral thoughts, clamoring for blood.[8] Their Dreadhorn Clan's victims felt compelled to use the forge to seek revenge on the Reachmen, reversing the roles of hunter and prey.[11]

Elsewhere, Domihaus had been laying siege to Falkreath while the hold's Jarl took to hiding in his longhouse. His daughter and thane, Eerika Skjoralmor, led the remnants of the resistance.[12] She held the town for some time until the intervention of the Undaunted, who crossed the battlefield and aided the thane in her effort to save the city. The group was able to defeat Domihaus at the jarl's keep and witness the coronation of Jarl Eerika.[13] With Hircine's forge shut down and his champion Domihaus slain, the Dreadhorn clan was devastated. Members of the Undaunted speculated that since the forge was uncovered, it was unlikely that it would remain unclaimed.[14]