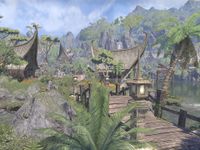 Black Heights is a village found in the hills of the Tenmar Forest, in the province of Elsweyr. It is a humble town of artisans. The ancient arts of Black Heights have been passed down for countless generations, since the town's founding. Their vast arrangement of pigments, collectively found in the Colorworks have been sought after across the continent.[1] On the southern edge of town is Khenarthi's Breath Temple, dedicated to the eponymous goddess of winds, Khenarthi. The temple is primarily populated by an Alfiqi priesthood.

A point of interest within Black Heights is the Wall of Life, where the villagers go to paint at the end of their lives. When they've left their mark, they cross the Passage of Dad'na Ghaten behind the great mural, ringing the Khenarthic Bells strewn across the path to signal to Khenarthi that they are ready to be flown to the Sands Behind the Stars.

Black Heights dates back many generations and their works come from passed down traditions since its founding. Some of its oldest paintings are found on stones, where the people creating vast and vibrant images using their paws, especially the young. Perhaps the greatest example of this is the Wall of Life, which depicts a blooming tree in many colors. Every member of the village adds another leaf to the ancient composition before they pass away.[1]

In 2E 582, the Wall of Life was tainted by the corrupted dark magic of Namiira, the Great Darkness of Khajiiti mythology. Years prior, the Dagi painter, Dak'radhi was influenced by the spirit when the death of his wife had left him to greatly mourn and question Khenarthi's will. This led to his eventual death and his transformation into a malevolent spirit, embracing the Dark Behind the World. Many years later, his influence began to seep into the Wall of Life, turning its vibrant colors into dark blues and blacks, reflecting the Great Darkness. It was through the mural that he sought to claim his son, Vijari, slowly turning him a Dro-m'Athra and bring him closer to Dak'radhi. His wife, Ka'ishka was forced to call for help from the Twilight Cantors, agents of Azurah, specifically her twin sister, Adara'hai. Both Adara'hai and her associate exorcised the dark energy from Vijari and sent Dak'radhi back into the Dark Behind the World, at the expense of Vijari's life. In the end, the Wall of Life was restored.[2]

During the Imperial Simulacrum in the late-Third Era, the village of Black Heights was an active settlement. It was ruled by Lady Fajjan and it had a rivalry with other villages, such as Chasegrove, Duncori Walk, and Markgran Brook.[3] Black Heights was neighbored by several settlements, including Duncori Walk to the northeast, Markgran Brook to the south, and Tenmar Forest to the west.[4]