Speak to the Guildmagister, who says:

"The Mages Guild is in need of someone to guard the magical (magical item) tonight. Is it feasible that you could do it for us? There's a (gem) in it for you."

"The Guildhall -- how should one put this? In life, I think you'll agree, there are always some people who just ... well, the Guild has always stood for, or, rather, had problems with ... Listen, young (player's guild rank), we need a guard. Will you do it?"

"Be at the Mages Guild by midnight. Your period of guardianship will last until 3:00 in the morning."

"No problem. There are always other guild members looking for work." 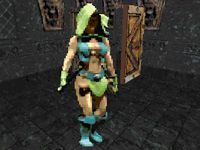 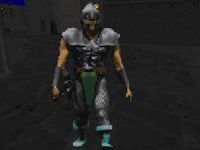 If you abscond with the item, the Mages Guild sends bounty hunters after you

Go to the local Mages Guild before 00:00, the guildhall will be open 24 hours per day during this quest and won't close at 23:00, even if you are not at rank 6. Guard the guildhall from 00:00 to 03:00 and kill all thieves that may show up, loiter until they appear. When you hit a thief for the first time, you will hear the following:

"Lookee here boys. A guard. Gee, I'm all scared and shaking. Lets leave the tongue on the door as a warning not to mess with the thieves guild. Get him!"

You must kill at least two of them to complete the quest successfully. Talk to the Guildmagister past 03:00 and collect your reward from him.

It is not required to do so, but you can pick up and use the magical item you should guard at will between 00:00 and 03:00 as long as you stay in the guildhall. But you must not leave the building with the item. In this case, and if you still carry the magical item after 03:00, the guild will assume you have stolen it and will send some knights after you to kill you. When hit, the first knight will shout:

"I claim bounty on the thief and traitor to the Mages Guild."

In addition you will lose reputation with the Mages Guild. If you can avoid the knights for three days, after you have taken the item, it will remain in your inventory, but the quest will count as failure. As long as you are still at the guildhall you can drop the magical item anytime.

When you have guarded the magical item successfully the Guildmagister will say:

"Well done, (player's first name). Those thieves didn't stand a chance against you. Here, take this (gem). It's really the least we can do."

If you leave the guildhall with the magical item, or still carry it after 03:00, you will lose additional reputation as seen below.