Speak to Falco about your next assignment, the delivery of a Colony Status Report to Carnius Magius within 5 hours (see important note below about the time allowed). Remember that this is five hours of game time, not real time (a fast character should be able to make it there in under 30 minutes). If the time expires, you'll receive a journal entry to that effect. You may find that with the short time requirement on the quest, you don't really have time to stop for exploring or fighting. It's best to use Speed-enhancing items and/or spells. Avoid using the ship between Raven Rock and Frostmoth; ship travel time is randomized, and may take much longer than you want in game time. 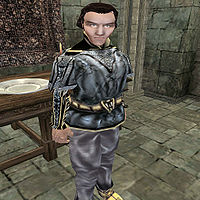 After a quick run (or a quicker Divine Intervention) to Fort Frostmoth and up to Carnius' chambers, you find that he isn't there. Instead, you'll encounter his new assistant, Constans Atrius, who will say that Carnius has just stepped out, possibly to inspect future expansion sites.

Carnius will be found in one of three random locations (determined when the quest is activated), as detailed below.

Once you speak to Constans, a trap will be activated, most likely set on purpose by Constans or Carnius to slow you down. The trap casts a spell called Trespasser's Bane that inflicts Drain Agility by 50–100 points for 600 seconds, Drain Speed by 20–80 points for 600 seconds, and Burden by 100–200 points for 300 seconds. The trap is set in the rug in the room, so Levitate or Jump over it, use Resist Magicka spells or equipment, or step carefully around it. If you do trip it, you can go right downstairs and use the Imperial Cult Shrine to restore your attributes (though you may still be Burdened).

He is particularly easy to find at night due to the torches he and his guards are carrying. It will take at least 45 game minutes to reach him from the fort, at normal running speed.

Give the report to Carnius (use the dialogue topic report), who will be rather "surprised" that it arrived on time and that you were able to find him at all.

If you successfully deliver the report to Carnius in time, return to Falco for a 1000 gold reward and a 12 point boost to your faction reputation.

If you fail the quest for any reason, you will be expelled from the East Empire Company faction when you return to Falco; you cannot get back in.