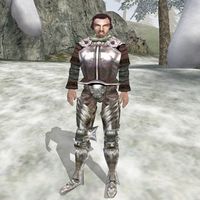 Falco Galenus is an Imperial noble, sent out to verify findings of Ebony at Raven Rock. He is one of the two quest givers for the East Empire Company story line.

Falco is weary of Carnius Magius' corruption, and the two are always at odds with each other. You must choose which one you will support, as things turn ugly and the colony of Raven Rock grows.

He is wearing imperial silver cuirass and steel greaves with matching boots. He is also wearing a common shirt with matching pants and shoes and is wielding a silver longsword. Aside from his natural charm and ability to absorb fatigue from others, he knows no spells.