Speak to Falco/Carnius about your next assignment to be told about the recent attacks by Spriggans, apparently concentrated on the East of Raven Rock near a cluster of trees. Falco/Carnius wants you to investigate and clear up the matter and report back to Unel Lloran in the bar. 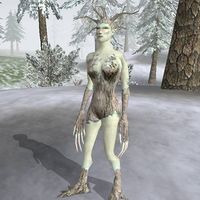 One of the four Spriggans

The directions Falco/Carnius gave you for the Spriggans are quite misleading, as the four Spriggans you have to kill will actually spawn inside the colony. Two are at the back of a building just southeast from Falco. Another can be found among the new construction on the east end of town. The last one is located at the back of the round building beside the tavern. Kill all four Spriggans three times each. There will be a journal entry when you are finished.

Once the four Spriggans are taken care of, you can visit Unel in the bar (he'll dismiss you if you talk to him before the four are dead). He'll say that although you've taken care of the Spriggans, the trees still cannot be cut down, mumbling something or other about finding the roots. He suggests checking around in the mine to see if you can find the roots or anything else down there.

Speak to anyone in the mine about roots to learn that, indeed, they encountered some nasty roots in the mine off of the northern passage. Explore the mine until you find a door to the Abandoned Mine Shaft. Enter and shortly inside you'll receive a journal entry telling you to inform Unel about what you've found.

When you return to tell Unel of what you found about the roots, he'll want you to escort him down to the mine to see for himself. Once you've escorted him to the roots, an uneventful trip, he'll ask you to get him five Bittergreen Petals with which to poison the roots' water. He also mentions that the petals are unlikely to be found on Solstheim (which appears to be true). The quickest route might be to cast a Mark spell here, then Almsivi Intervention over to Gnisis. Just inside the Temple you'll find Zanmulk Sammalamus, who sells an infinite supply of Bittergreen Petals. Once you have them, return and give them to Unel. He will thank you and tell you to go visit Falco/Carnius and tell him the news.

Return to Falco/Carnius with the news about the roots and receive a gold reward (2000 from Falco or 1000 from Carnius).