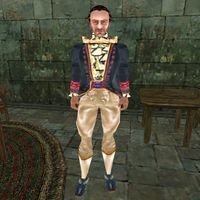 Carnius Magius is an Imperial noble and the local Factor of the East Empire Company. He is in charge of development and mining for Raven Rock. You can find him at Fort Frostmoth, where he's been given quarters above the Imperial shrine.

Carnius has a "different" idea how to make the most of his assignment in this icy, remote place, such as killing employees who know too much after they have outlived their usefulness. He is a bitter enemy of Falco Galenus, and the two are always at odds with one another. At some point during the East Empire Company Quests, you must choose to side with one or the other. If you side with Falco, Carnius will dislike you and treat you the same way he treats Falco.

Interestingly, even before starting any of the East Empire Company quests, Magius wields a Stalhrim Mace, despite the fact that the only person who appears to be able to fashion Stalhrim items is Aenar, and he is only able to do this after completing the quest Discovery in the Mine, in which you become the sole possessor of the means to acquire Raw Stalhrim.