My name is Alex, and I live in Canada. I was born in British Columbia and I currently live in Ontario. In case you haven't already noticed, I'm a little obsessed with userboxes.

I first played Morrowind in the Summer of 2012, and have been playing the games ever since. I played Oblivion shortly afterwards, and it was the first TES game I played from start to finish. I then got Skyrim, which I've played and replayed countless times (And the game still surprises me to this day). I participated in the last 3 or 4 Elder Scrolls Online beta tests.

I love the Imperials and everything to do with the Empire, and I have a soft spot for the Dunmer.

Join up with me on ESO, my UserID is @CaptainDumac! 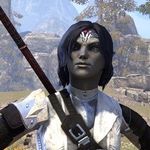 Valia Vakos is a Dunmer Sorceress hailing from the Colovian Highlands region of Cyrodiil. She is proficient with lightning-based magic, a result of her training at the Arcane University in the Imperial City. Like any mage, Valia is curious and hungry for knowledge. She tends to think logically and makes decisions based on what she believes to be the greater good. She abhors robes, believing that there's no reason a mage should sacrifice agility by having cloth draped down to their ankles.

Valia was born in 2E 559 to wealthy parents near Skingrad. She grew up following Imperial customs, her parents having abandoned the Dunmer way of life. From a young age, she was facinated by magic, and strived to one day become a master wizard. By 2E 575, she had enrolled in the Mages Guild, and quickly gained access to the Arcane University. During her time there, Valia befriended and later fell in love with an Altmer woman named Lilenwe. Lilenwe (or "Lily" as Valia took to calling her) felt very out of place in the world, having been shunned by her family back on the Summerset Isles. Valia felt bad for her, and warmed up to her quickly. Eventually the two realized their feelings for each other, and were practically inseperable until disaster struck in 2E 578.

On the day the Soulburst happened, Valia's family was visiting her in the Imperial City. Everyone felt the world shift when it happened, and mere minutes later the city was lousy with daedra and cultists. Most, if not all of Valia's visiting family members were killed before her eyes by the cultists. She, however, fought back. The cultists were unimpressed, but decided she would be "useful" to them, and knocked her unconscious instead of killing her. When she came to, Valia found herself imprisoned in a realm of endless prisons, where the air was perpetually cold, and every aspect of the realm assaulted all her senses. She was placed on an altar, and her soul was taken from her by a necromancer. It seemed like the end for her, but in reality, it was only the beginning.

Despite her dark past, Valia remains cheerful and positive. She is open-minded, yet stubborn, merciful, yet unrelenting. She always works with the greater good in mind, but she believes that the ends justify the means. She does not hesitate to kill, or otherwise harm others if she believes it will lead to a positive result. Valia is strong and proud, but becomes easily flustered when embarrassed or around people she finds attractive. She often tries to use her status as a hero to get what she wants, even when she knows it won't work. She is somewhat disgusted by Dunmer culture, and doesn't understand why her people chose to live in "that ashen hellhole."

For unknown reasons, Valia's eyes are silver instead of the normal Dunmer red. Valia herself is unconcerned with the subject, but many others are curious about it. Some believe it's an outward sign of a divine blessing. Others believe it's a sign representing her fate as a hero. Valia shrugs it off as simply being a lack of pigmentation.