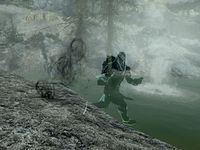 Once you've installed the Shadowrend Creation, you will receive this quest. The journal entry will inform you that an inner voice is drawing you to a geyser pool in Eastmarch in order to confront the darkness within yourself. The geyser in question can be found northeast of the Atronach Stone. The pool contains skeletal remains which have stained the water black, and will begin to froth as you approach.

Above this anomaly, a weapon will appear. It is Shadowrend, a shadow weapon from the ruins of Milchar in the Shivering Isles. Shadowrend is both a greatsword and a battleaxe, and it will proceed to cycle between each version, with the weapon warping in and out of existence until you attempt to take it. Touching the weapon will summon a Shadow enemy named "[player]'s Shadow". It is a shadowy clone of the player character, meaning it will wear your equipment and know all of your spells, powers, and shouts.

Defeat the Shadow and claim Shadowrend from its remains to complete the quest. Whichever version of the weapon you didn't select will reappear above the pool, where it will hang in the air indefinitely. You can return to the pool any time in order to switch between the two versions of Shadowrend. Each version is a powerful Daedric weapon in its own right, with a 15% weakness to magic enchantment.