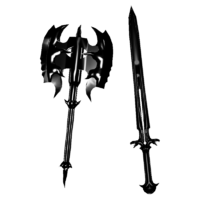 Shadowrend is a weapon retrieved during the main quest. It is one of the most powerful weapons in the game.

Shadowrend is obtained in the quest Symbols of Office. When you reach the Grove of Reflection, you will have to battle with a shadow version of yourself. You must retrieve the blade/axe after defeating your clone, at which point the weapon is normally dropped on the ground. However, the clone drops Shadowrend only if it is equipped and unsheathed (see quest bugs for details). It helps to save before you fight your clone, in case it does not drop Shadowrend.

The Skull of Corruption glitch in combination with the Staff of Worms may also be used to retrieve it.

In general, the sword and axe versions of Shadowrend have the same statistics, other than the governing skill. One exception is the weapon's weight for the maximum level version.