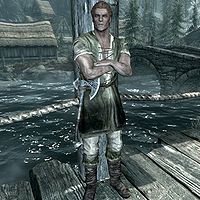 Thonnir is a Nord lumberjack living in Morthal with his son, Virkmund. During the day he can be found working at Jorgen's mill, and at night in his house located not far from the Thaumaturgist's Hut. He will sell lumberHF to you if Hearthfire is installed.

Among the other recent odd occurrences in this small township is the disappearance of his wife, Laelette, although according to him it's simply a case of her abandoning her family to join the Stormcloaks. When the truth is eventually discovered, he forms a posse with other Morthal residents to take revenge, but is the only one who doesn't chicken out in the end. You have a choice to take him with you into Movarth's Lair, or to let him go back to Morthal. However you don't need to worry too much about him as he is essential and can't be killed.

Afterwards, Thonnir returns to his simple life, although he has yet to tell his son what really happened to his mother.

Thonnir wears a set of farm clothes along with a pair of boots. He wields a steel war axe and carries the key to his house, a torch, and a selection of common loot and gold.

When you first meet him, Thonnir will provide you with some advice: "Keep your wits about you. Morthal's hardly a safe place." He will then begin to talk about the horrible predicament he is in, telling you that he wants to leave Morthal: "I'm just a poor man trying to make a living. I'd leave Morthal were it in my power." Blaming the Civil War for the death of his wife, he will tell you: "This damned war has cost us... me... everything." He will also express his concerns for the life Virkmund will have without a mother: "My boy's to grow up without a mother? What life is that? It's not right, I tell you." Realizing that you may not know what has happened to his wife, he may then tell you about her mysterious disappearance: "Hasn't been seen for a while. She just vanished without a trace."