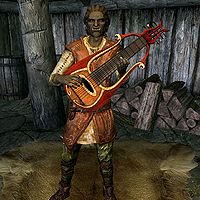 Lurbuk is an Orc bard found at the Moorside Inn in Morthal. The local innkeeper, Jonna, claims that the only reason she hasn't booted him out is because there aren't any other customers for him to bother. A contract is offered on him in the Dark Brotherhood questline. He is known as one of, if not the worst bards in Skyrim, a fact he seems either oblivious of, or just ignores.

Lurbuk wakes up at 6am and heads to the main room of the inn to play an instrument for the entirety of the day, occasionally chatting with Jonna, before heading to sleep at 1am. During the quest Laid to Rest, Lurbuk is one of the town members that band together and form a mob outside of Movarth's Lair. Like most of the mob, however, he is too afraid to actually enter the lair and heads back to town soon after.

He wears a set of farm clothes along with a pair of boots. He carries some common loot and gold and an iron mace.

Lurbuk is very friendly upon greeting you and will state "A new face! Such a welcome sight in dreary old Morthal. Welcome friend, welcome!" He's just as happy in normal conversations and will often add rhyme or song to his dialogue: "Don't fret over the gloom, there's nothing to fear! Old Lurbuk will brighten your spirits -- just lend him your ear!", "The good people of Morthal have yet to embrace my talent.", "Try as you may, they won't say "good day," but will just walk away. Worry not, Morthal! Lurbuk is here to stay!", "The fair Jonna does me a great courtesy by allowing me to entertain the guests of her noble establishment.", "I, Lurbuk the Great, will win the hearts of the people of Morthal one day, mark my words!"

He will often talk to Jonna about his songs:

Lurbuk: "Jonna, do you think the townspeople are warming to my serenades?"
Jonna: "No. They ain't. And they aren't gonna. If you weren't payin' for your room, I'd have thrown you out a long time ago."
Lurbuk: "Yes, but they'll come around eventually. You'll see."
Jonna: "Oh, I shouldn't be surprised if they come 'round. And if you're never seen or heard from agin [sic]."

Lurbuk: "I'm thinking of composing a song about you, Jonna. Would you prefer that I proclaim your beauty, your strength, your..."
Jonna: "Nah. Just... don't. Leave me outta it."
Lurbuk: "No interest in being immortalized in song? Remembered and praised for all eternity?"
Jonna: "No. I mean it."
Lurbuk: "When I'm known throughout Tamriel, you'll regret this decision."

Once you've received your orders to kill Lurbuk, you may ask Nazir about him. He will jokingly state, "He is, by all accounts, the worst bard in all of Skyrim. Apparently so many people sought his death, Astrid had to hold a lottery to determine the client." Like with most targets of the Dark Brotherhood, you may also have a word with Lurbuk before killing him. He'll be just as gleeful as always: "Is the line for my next performance starting already? Come on, don't be shy. Plenty of room for everyone." and you can reply in three ways.

"Sing me a song, bard. A song of fear, and death!"
"Hmm... All right... How about this? Shadows creep, and... and phantoms leap! A man got... he got scared. And the demons dared! To um... visit upon him all which they feared! Brilliant, I know. It's a gift." (he walks away)
"Someone hired the Dark Brotherhood to kill you, Lurbuk."
"Ha! Oh, that's a good one, friend. Killing Lurbuk... I mean, can you even imagine something so ludicrous? Depriving the world of my unique talents?" (he walks away)
(Remain silent)
"What's the matter, friend? Khajiit got your tongue? Maybe you need a little ditty to loosen your gob, hmm? There once was a stranger, with eyes full of danger, he spoke not a word, but his meaning was heard... Sing on, sweet Lurbuk, sing on!" (he walks away)

Approaching him again will have him happily state, "I'm in the mood to ssssiiiiinnnggg! What about you, friend? Care to join me?"