The temple located in Markarth is dedicated to Dibella, the goddess of love, beauty, and artistry. It is maintained by several priestesses and Hamal. Upon entering the temple, you will find the priestess Senna, who will inform you that: "The sisters are communing with Dibella. They can't be disturbed. You'll have to come back another time." In order to access the Inner Sanctum, you can either try to pick the expert-lock, or steal the key from Senna. Note that if you choose to pick the lock and do not accept the deal from the Priestess, you'll have to do it twice—once to get into the Sanctum, and once to get out. 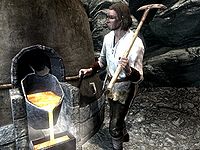 A distraught Enmon working at the smelter

If you choose to help the priestesses find the new Sybil, you are directed to visit Karthwasten and locate the young girl's father, Enmon, who may be found working in the mine or at the smelter. If you speak to any of the local residents, they will all direct you to speak to him as well. If you tell him that you are looking for his daughter, he will retort: "Damn it, man/woman, are you trying to taunt us?" Asking him what he meant, he will explain: "Our daughter, Fjotra, was taken from here. The Forsworn descended and... they didn't touch anything else. Just our little girl." Also asking where they took her, he will continue: "It was the Forsworn from Broken Tower. Never been much trouble before. What's it to you?" You can now respond to him in two different ways:

If you tell Enmon that you just want his daughter to be safe, he will remark: "That's... that's good of you. If you were to save her, I would be very grateful. I don't think there's anything I could give you, though..." However, if you tell Enmon that Fjotra is the new Sybil of Dibella, he will say: "She... really? That's... I wouldn't have dreamed. Of course, we need her in Markarth, then. I'll come with you." If you agree that he should travel with you, he will thank you and accompany you to Broken Tower Redoubt. Note that if you take him along with you, he is a non-essential NPC, and can die. You can also tell him that he should stay, and he will reply with urgency: "You're... probably right. Just hurry, please. Who knows what those things are doing to her." You are now directed to travel to the Broken Tower Redoubt and rescue Fjotra from the Forsworn holding her captive. 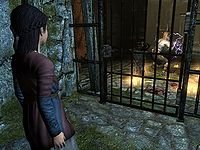 Making your way through the Broken Tower Redoubt, you can find Fjotra in her cell, guarded by a Forsworn Briarheart. After you have defeated the Briarheart and freed her, she will ask: "Are you one of them? Please don't hurt me." When you tell her that you are to bring her to the Temple in Markarth, she will exclaim: "Then it is true what they said? I am touched by the gods?" Her suspicions confirmed, Fjotra will then accept her title as the new Sybil of Dibella: "I've heard stories about the wonders of the great Temple in Markarth. But I never dreamed that I would even get to see it. I am honored to be called for this duty. Please, lead on." 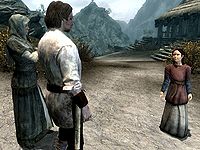 You must now return Fjotra to the Temple to become the new Sybil of Dibella, but you also can take a detour to Karthwasten, so Fjotra can say goodbye to her parents, Enmon and Mena, who will give her a very heart-warming farewell:

Afterwards, Enmon will approach and thank you: "Thank you for getting her back from the Forsworn. Dibella was smart to have sent you." You can now return to Hamal in the Temple of Dibella in Markarth to complete the quest. 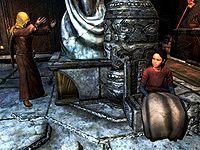 A new Sybil in the Temple of Dibella

Upon arriving back at the temple, Hamal will be grateful for the safe return of Fjotra: "You... you found her? I can't believe it. Let the girl come with me and we can begin her preparation. I will send word to her family that she is in good hands. You've truly earned the Blessing of Dibella, child. Prostrate yourself before her altar, and she will bestow her gift." You are now directed to kneel before and then drink the blessed water, which will bestow the Agent of Dibella passive ability. This grants an additional 10% physical damage against enemies of the opposite sex, and the quest will now be marked as complete.