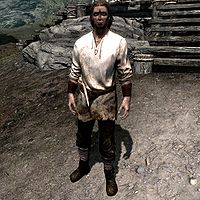 Enmon is a Breton miner living in Karthwasten with his wife Mena. They have a daughter named Fjotra, who has been kidnapped by a group of Forsworn.

As it turns out, Fjotra is the new sybil of Dibella, and you will be directed to travel to Karthwasten and speak to Enmon. When you tell him of your intention to liberate the girl from her Forsworn captors, he will insist on accompanying you. However, he can be talked out of it if you prefer to travel alone. He contributes very little to the battle and is likely to be killed in the rescue attempt, so the best decision may be to leave him in Karthwasten.

He wears a set of miner's clothes and a pair of boots, and is equipped with a pickaxe. He carries a key to his house and a selection of lower-class loot and gold.