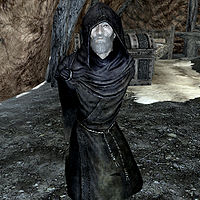 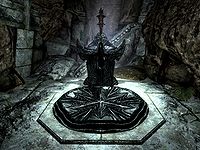 "I want the priest who did this to bend his knee and give me his soul."

Logrolf the Willful is an elderly priest of Boethiah who has repeatedly desecrated the shrine of Molag Bal, the Daedric Prince of Domination. During the quest The House of Horrors, Molag Bal will awaken and command that you bring him the priest, so he can finally get his revenge on his archenemy, Boethiah.

You can now choose to ask Molag Bal if he wants revenge on Boethiah, or simply claim that you never wanted to help him. The first option will make Molag Bal say: "Revenge? No. I want submission. I want the priest who did this to bend his knee and give me his soul. He comes by to perform Boethiah's insulting rites at my altar, but he's been missing. Captured and bound. Left to rot. Save him. Let him perform his rite one more time. And when he does, we will be waiting for him." If you choose the latter option, the bars will immediately lower, although Molag Bal's offer still stands: "Fine. I offered you a reward. You'll get the freedom your kind enjoys so much. But Boethiah's priest is imprisoned as well. But not by me. He is hurt. Suffering. Save him. Let him perform his rites one more time. And when he does, I will be waiting for him."

At this point, Logrolf the Willfull will spawn inside one of six possible locations in The Reach, all inhabited by Forsworn. Follow your map marker and locate the imprisoned priest of Boethiah. When you talk to him, however, he will turn out to be arrogant and mocking: "You there. Are you here to kill me? Slay the mighty Logrolf while he sits tied and helpless?" You can choose between two options; either tell him to stay put, which will make him say: "Coward. You're nothing. Nothing!" If you tell him you are there to rescue him, he immediately gets suspicious: "Rescue? No one knew where I was, when I was taken. Who sent you?" You will have several options now. Note that you need a Speech skill of 50 to successfully persuade him:

Once you have his trust, you will be presented with yet another two options; either you tell him to wait to which he responds: "That's all I can do, you idiot. What are you waiting for?" If you instead untie him, he will not exactly show gratitude: "Ah, freedom. Now get out of my way. I have a task to attend to." Without hesitation, Logrolf will then set off at a running pace and travel (see notes) all the way to Markarth, where he will enter the Abandoned House right away. 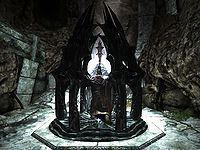 "Do your worst, monster!"

When you return to Markarth, Logrolf will be waiting for you inside the house, eager to cleanse Molag Bal's shrine once again. He will rush into the basement and face the shrine, saying: "Molag Bal. You think you can best Boethiah's faithful? I have won this contest before!" He will then be trapped by the spikes and Molag Bal will answer: "Ah. But I have my own champion this time, Logrolf." The priest will then turn around and face you, realizing he trusted a traitor: "What? You!" Molag Bal will then address you: "Mortal. I give you my mace, in all its rusted spitefulness. Crush the spirit from Logrolf's bones. Make him bend to me." Logrolf will then kneel down and it is up to you to beat him into submission, using the rusty mace. As you beat away on the kneeling Logrolf, he will randomly say one of several outbursts: "I won't bend. Never!", "Do your worst, monster!", and "I'll never submit!" When Logrolf dies, Molag Bal will laugh and say: "Ah ha ha! You mortals and your frail, limp, pathetic bodies. Try it again." He will then revive Logrolf, and you will be forced to keep beating him. Logrolf himself is getting exhausted, saying: "I... won't... surrender!", "Call... that... a... swing?" or "You.... You'll pay for this...." As his health decreases, he will start to beg: "No.... Not again!", "Don't kill me.... I don't want to die!" and "No more.... No more!" When his health is gone, he will finally be broken:

The last order is aimed at you, and there will be no choice but to kill the helpless Logrolf, and in return receive the Mace of Molag Bal. When you thank the Daedric Prince for the gift, he will hint at a hard afterlife for Logrolf: "Now, I have a soul in Oblivion that needs claiming. Take care of the house while I'm gone. Ha ha ha!"