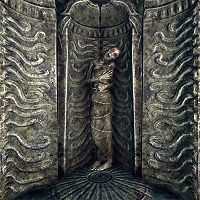 The Night Mother is being transported by Cicero to the Falkreath Sanctuary when his wagon wheel breaks and they are stranded together near Loreius Farm. Cicero and the Night Mother will make it to the Sanctuary with or without your help, and will live there until the destruction of the Falkreath Sanctuary. After the quest Hail Sithis!, she will be transported to the Dawnstar Sanctuary by Babette and Nazir, where she will remain indefinitely.