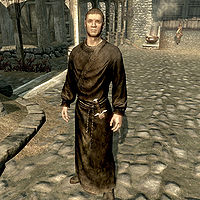 The Student, a Breton conjurer, can be randomly encountered in or near any major settlement after you have learned a Ward spell. As soon as the student sees you, he will ask for a simple task. He seems to see you as his hero, and simply wishes to learn how a certain spell works, usually a ward spell, to improve his chances of joining the College. If you accept the student's request, he will first instruct you to cast the specified spell. He will then cast the same spell, and finally thank you with a few scrolls. [verification needed — see talk page]

He wears leveled black mage robes, possibly hooded and/or enchanted, along with a pair of boots. He wields a leveled staff coupled with a possibly enchanted dagger that can be up to Daedric in quality, and carries random warlock items and two random copies of atronach forge recipes, one of which is written in the Daedric alphabet. He knows the spells Lesser Ward, Flames, Oakflesh, and Conjure Flame Atronach.

He will run up to you excitedly, greeting you with "I've finally found you! I want to join the College of Winterhold. But I need help with my wards. Can you teach me?" If you decline, he will be disappointed: "Oh. All right... I guess I'll just keep practicing on my own. Sorry to bother you." He will then bid farewell. Accept and he will instead reply, "Really? Great! Okay. So, first, you raise your ward and I'll throw a little spell at it. That way I can see the 'right' way to do things." He will prepare his spell, telling you to "Get your ward ready." If you have not readied your ward, he will say, "Come on. I don't want to hit you until you have your ward ready." Once you've cast a ward, the student will tell you, "Great! Now I'm going to cast some spells at you. Keep your ward up so I can study it." as he casts a spell against your ward, usually Flames. He will say, "I think I see what I was doing wrong..." and talk to you again: "All right. That should do it. I think I'm ready to try the College again. Thanks!", ending your conversation with him.