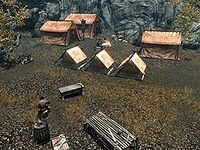 Rift Imperial Camp is an Imperial camp in the Rift, located south of Ivarstead and west of the Ruins of Bthalft. 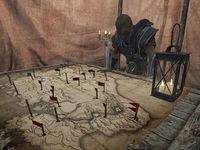 The camp is normally commanded by Legate Fasendil, except during the related quests, at which point Legate Rikke will assume command.

†This person only resides here during the related quests.

It is a very small and compact Imperial camp, consisting of a central campfire with a cooking spit hanging over it, around which the rest of the camp is arranged. Due to the proximity of the Ruins of Bthalft, there are regular skirmishes between the Imperials in the camp and the bandits in the ruins. To the northeast and southeast of the camp are barricades, while to the northwest and southwest the camp is butted up against rocks rising above. South of the campfire is the Legate's tent, containing an owned single bed, with an unlocked chest at the foot of the bed and an end table beside it. To the right of this tent is the command tent, containing an end table and a large table covered with a map of Skyrim showing the progress of the civil war and the various forts and cities held by each side. This is where the Legate spends most of their time. To the west is a wood chopping block, while to the north is the hospital tent, which contains three bed rolls occupied by two wounded soldiers and a small table holding a random potion of health and a random potion of healing. Outside is an alchemy lab and some barrels. Behind the hospital tent are two picketed horses. They are owned, and taking them is considered stealing. To the east of the campfire is a row of three small tents containing unowned bed rolls. Behind these tents is the workstation for the Imperial quartermaster. It consists of an anvil, a grindstone, and a workbench, with a wooden table covered in various iron and steel weapons and armor. More are behind, on a barrel and some crates.

Any time the Rift is controlled by the Imperials, this camp will not be present. As long as you haven't completed Joining the Stormcloaks, you are free to sleep in the small tents and trade with the quartermaster.