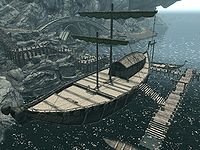 The Red Wave tied up at Solitude docks

The Red Wave is a pirate ship docked at Solitude. 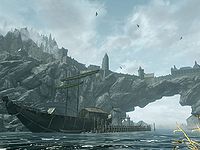 The Red Wave; Solitude and the Blue Palace in background

It is commanded by Safia, a pirate captain targeted in a Dark Brotherhood side quest.

* These people are essential.

The interior of the ship is messy, with empty wine bottles all over the place and many food barrels around the quarters. Upon entering the ships quarters on the deck level, you will normally find all of the crew except the captain. There is a stack of food barrels in the northeast corner with a basket on top containing a common book. Against the hull to the west is a square wooden table and a couple chairs, with a cupboard behind holding two potions of minor stamina and two random stamina potions. Against the bulkhead to the south is a second table and chairs.

To the left of the second table is a flight of stairs leading down to the middle deck. At the bottom of the stairs is a cupboard holding a bunch of tundra cotton, three bulbs of garlic, a gourd, a single loose septim, a set of fine clothes, and a pair of boots, with a small set of shelves holding four bottles of Nord mead to the left. There is a stack of food barrels farther to the left and a door to the right. Through the door is a bedroom containing a double bed in the southeastern corner, with an empty chest at the foot of the bed and a tall wardrobe against the south bulkhead. Against the north bulkhead is a long wooden table and chair.

The corridor follows the hull of the ship to the east, with stacks of barrels of food on both sides. Ahead is a large cupboard holding a knapsack, an iron mace, and a woodcutter's axe, with a copy of the Sneak skill book Legend of Krately House on top, and a chair beside it against the north bulkhead. At this point, the corridor doglegs to the left.

Around the corner to the west is the dining area, with a long counter against the south bulkhead full of clutter, and a pair of random boots and a potion of minor healing on the floor to the right. A cupboard against the same wall holds two more potions of minor healing and two random healing potions. Against the hull to the west is a long table with two potatoes, a raw rabbit leg, a pheasant breast, several loaves of bread, and pieces of cheese on top. Hanging above this table are two racks holding a total of five whole salmon, with a further three slightly to the right hanging from another rack over some food barrels. Against the north bulkhead is a long wooden table and two chairs, with two portions of grilled leeks, a bottle of wine, a raw rabbit leg, a salmon steak, three seared slaughterfish, two loaves of bread, and a goat cheese wheel on top. To the right of this against the east bulkhead is another cupboard.

The last doorway on the left leads into a room and corridor with a wardrobe and a barrel against the south bulkhead on the immediate left. To the right of the wardrobe is a set of shelves holding two pieces of iron ore and four leather strips, with a stack of food barrels farther to the right with two random potions on top of one of them. On the right as you enter is a long wooden table with a chair in front, with a food barrel to the left and a counter around the corner. Against the hull to the west is a series of sets of shelves. The first holds several mead barrels, a bottle of wine, and two bottles of Nord mead. The second holds fifteen iron ingots, a piece of iron ore, four steel ingots, two silver ingots, and a leather strip, with a pair of random boots on the floor to the right. Farther to the right, a smaller set of shelves holds a woodcutter's axe, two bottles of Nord mead, and an empty wine bottle, with a food barrel to the right with a random shield on top. The last set of shelves is filled with mead barrels, two bottles of Nord mead, and an empty wine bottle, with a sword on top. At the far end of the ship are more barrels of food on and under a large shelf at the rear, in front of which is a chair next to a crate with a bottle of alto wine on top. Opposite the shelf is a flight of stairs leading down to the cargo deck.

The cargo deck is full of food barrels, a single empty chest, and a master-locked safe, the key for which is carried by Sabine Nytte. In the safe, among the other loot is a note from someone named Dyryn. The note mentions a chest under the ship that contains something called balmora blue, which is needed for the Thieves Guild reputation quest in Solitude. The chest under the ship can be unlocked using another key carried by Sabine.