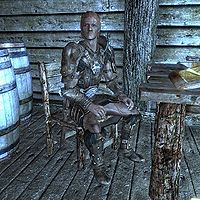 Dorian in the Red Wave

Dorian is a Breton thief and a pirate aboard the Red Wave, under the command of Safia.

Dorian wears a set of leather armor, including the bracers and boots. He carries a belted tunic, a selection of common loot and gold, and an additional small amount of gold. He carries a leveled war axe, bow, and twelve arrows, all of which can be up to Daedric in quality.

Should you approach him, Dorian will quickly explain to you that his interests may be a bit more refined as compared to most pirates: "Forget wine, women and wealth - give me a calm sea and a good book, and I'm happy." He will then elaborate on this, telling you about one of his favorite authors: "I hear Adonato Leotelli's staying up in Windhelm. I've read a few of his works. Be good to meet him someday." Thinking that he may be coming off too gently, he will then provide you with a stern reminder: "Don't misunderstand me, friend. I like my quiet, and I like to read. But you trifle with my ship, my crew, or my captain? I will kill you." He may also tell you about his life on the open waters: "You've not seen the night sky until you've seen it on the open sea." He will also comment on his captain, Safia, as long as she is still alive: "I've only been a part of the Red Wave's crew for a few weeks, but I've already learned to stay out of Captain Safia's way."