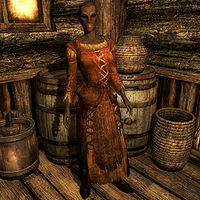 Niluva Hlaalu is a Dark Elf citizen who works at Black-Briar Meadery but is struggling to pay her rent and is worried Indaryn will fire her for being a skooma addict.

She starts her day early, waking at 4am. The next hour she will spend eating her breakfast before going to work at the meadery. At midday, she has lunch for an hour before resuming work for another 5 hours. At 6pm, she quits working and goes to Haelga's Bunkhouse for 4 hours of relaxation before heading to bed there early at 10pm.

Niluva wears a set of farm clothes and a pair of boots. She is equipped with a leveled dagger which can be up to elven quality, and carries a selection of common loot and gold.

Trying to speak to her will result in a series of defensive comments regarding how you cannot judge her for her addiction, "Hey, don't look at me that way! Who are you to judge me?" and "So what if I have a problem? I know how to deal with it!" If Maramal is still alive, he will also get badmouthed, "Maramal thinks he's so smart; tells me that Mara will cleanse the filth from my blood. Ha! What does he know?" From there on she will reflect on her past, "My n'wah of a father thought he could pull my strings... "continue the Hlaalu tradition." Bah! I left all that nonsense behind." As long as her boss is still alive, she will ask complete silence of you regarding her addiction, "If Indaryn finds out, he'll have me thrown out of the Meadery for certain. So don't breathe a word of it to him. Not a word!" She will then talk to herself about her financial struggles and the perfect solution, "Oh what am I going do? I can barely afford to stay at the Bunkhouse.", "I'm going to stop. That's what I'm going to do! Then everyone will see that I'm not as useless as they think."

During the quest Spread the Love, you may give her a pamphlet, though she won't be appreciative: "Mara only helps those who can afford her tithes. This is nonsense."

At the bunkhouse Tythis Ulen may talk to her concerning loaned money:

Tythis: "Niluva, you promised me you'd pay me back yesterday. So what's the story?"
Niluva: "Just give me a few more days and I promise I'll come up with it."
Tythis: "If you'd stop wasting your coin on that skooma, you'd have enough gold to live on."
Niluva: "Sorry, Tythis. I'll get it to you somehow."

While at the meadery, her fellow worker Romlyn Dreth will be more understanding:

Lastly, at the bunkhouse, Haelga can be heard yelling at her niece about Niluva's late rent:

Haelga: "Svana! Has that skooma-addled idiot Niluva paid us her rent yet? Or does she have more excuses?"
Svana: "She said she'll have it soon. She still has her job at the meadery for now, so she'll be able to pay us."
Haelga: "Why do you insist on defending that woman? All she does with her money is spend it on that Dark Elf garbage!"
Svana: "Just be patient, aunt. She'll have it, I promise."