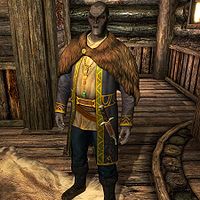 Indaryn is a Dark Elf warrior that Maven Black-Briar has appointed to run the Black-Briar Meadery in Riften. He is merely a puppet for Maven and not really allowed to make decisions on her behalf and, as a result, Indaryn struggles to keep his questionable staff in line. During Under the Table you can choose to help him find out who is selling Black-Briar Mead behind his back. Indaryn also seems to have fallen under the promiscuous spell of Haelga, an indiscretion to which you will have him confess during the quest Caught Red Handed.

Indaryn has a room on the second floor of the Meadery where he sleeps from midnight to 6am. He starts the day with a one-hour breakfast at the neighboring Bee and Barb then works the Meadery for twelve solid hours, either looking after his employees from the balcony above the vats, or helping out on the ground floor. At 7pm he returns to the Bee and Barb where he stays until his bedtime at midnight.

Indaryn wears a set of fine clothes and a pair of fine boots. He is equipped with a leveled dagger which can be up to elven quality, and he carries a key to the meadery, as well as a selection of common items and gold.

If you approach him while he is at work, he will say: "I'm the brewmaster around here. What did you want?" or "I'm quite busy. Need something or can I get back to work?" If approached outside the Meadery he will instead say: "Yeah? What do you want? If this is about the meadery, we can talk later." Even if he appears hostile, he will gladly share some thoughts. When asked if he runs the meadery, he will explain: "Maven Black-Briar wants me to keep the mead flowing and that's what I aim to do despite all these lazy good-for-nothings that work for us. Ever since I took over as the foreman the production of our mead has never been more profitable. And if the meadery is profitable, I get rich. Get the picture?" He will also share some thoughts about his employer, Maven Black-Briar: "Lady Maven could buy or sell anyone in Skyrim. I wouldn't be surprised if she's the one pulling the strings around this city. She's always welcome in Mistveil Keep and between you and me, I'm pretty sure she even has some pretty influential friends within the Empire. I'd also warn you not to cross her. She employs quite a few... troubleshooters to take care of messy problems." When you exit conversation while he is at work, he will bid you farewell with, "Good, now maybe I can get back to work." If exiting conversation when he is at the tavern, he will instead conclude: "Well, that was important." During the quest Spread the Love, you can hand him a pamphlet from the Temple of Mara, and you will get a hateful response: "What's this nonsense? Bah." When he spends time at the Bee and Barb in the evening, the discouraged Indaryn will sometimes complain to innkeeper Keerava, hinting that he is not a natural born leader and that his employees rarely listen to him: 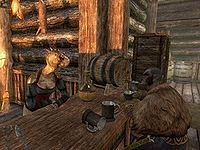 Indaryn: "Why don't they listen to me, Keerava? Why won't they do as I say?"
Keerava: "Maybe they're afraid of you. Maybe it's your breath. How should I know?"
Indaryn: "They always try to take advantage of me. Give them an inch and they'll take a mile."
Keerava: "I'll tell you one thing, if you don't make peace with them soon you may get a walkout on your hands. Then we're both in trouble."

When searching the tasting room where young Ungrien tries his best to sell the mead, you will notice three angry notes scattered around, all of them from Indaryn, and all of them hinting at huge problems in the meadery. The first note concerns a switch of the Black-Briar Reserve into regular Black-Briar Mead bottles, the second note concerns how the employees has filled Indaryn's bed with skeever droppings, while the third note, found on the tasting counter, is a regular threat from Indaryn, on behalf of Maven. However, this note is dismissed by a note from Maven found in Indaryn's bedroom. Indaryn apparently struggles to keep his employees under control and Maven off his back, as evident from his attempts at conversation with his employees, Ungrien and Romlyn Dreth:

Indaryn: "Ungrien! I just found another spoiled keg! What's the matter with you?"
Ungrien: "I... I'm sorry. I could have sworn I sealed it."
Indaryn: "Tell me something. Do you enjoy spending Lady Maven's gold for her? It certainly seems that way."
Ungrien: "No."
Indaryn: "This is the last warning. You do it again, and you'll be sleeping in Beggar's Row with the rest of the riff-raff!" 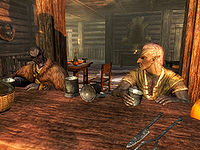 Indaryn: "Romlyn, I've been meaning to speak to you. I did a count at the meadery and we're four cases short... again."
Romlyn: "What are you saying? You think I had something to do with that?"
Indaryn: "I'm not accusing you of anything. Yet."
Romlyn: "The Dreth family doesn't steal, Indaryn."
Indaryn: "For your sake, I hope you're right. Because if it is you, and Maven finds out, the Dreth family is going to be one member smaller."

Romlyn: "So, what do you think of my plan. You in or out?"
Indaryn: "If you think I'd would make a move like that without asking Maven, you're out of your mind. Doing that would be a fatal mistake."
Romlyn: "Come on, think about it. She'd reward us!"
Indaryn: "If you want to go out to Whiterun and burn that meadery down, go right ahead. And when the guard traces it back here, and Maven is implicated, I'll be sure to tell her it was your idea."

Indaryn's accusations towards Romlyn Dreth turn out to be true, as he illegally sells Black-Briar Mead to innkeepers and customers all over Skyrim, right under the nose of his employer. When asked if he sells cheap mead, he will proudly explain: "No, no friend. You've got it all wrong. I'm not selling cheap mead. I'm selling good mead for cheap... Black-Briar Mead. I sell cases of it for half of what the inns and taverns pay through the Meadery. All I need is someone to deliver it for me. If anyone saw me leave Riften, they'd get suspicious." When asked to elaborate on the supposed delivery, he will say: "I need someone to take this small keg of Black-Briar Mead to Wilhelm at the Vilemyr Inn in Ivarstead. Drop it off and he'll trade you something for the delivery. Keep it as payment for the legwork. Oh, and if you bump into Indaryn from the meadery, keep your mouth shut. He'd rat us out in a second." At this point the quest Under the Table will show up in your journal, and you will have the option to either deliver the keg to Wilhelm or to tell Indaryn about Romlyn's undercover business. When you tell him, he will say: "Aye, I suspected as much but I've never been able to catch that little sneak with proof." When you show him the keg, he will get angry: "That fetcher! I gave him the same keg just this morning and told him to store it in the cellars. Oh, he'll rot in prison for this one I promise you. As soon as Maven finds out, it's all over for him. Here, take this as a bit of a reward for nabbing our little thief." He will then hand you some leveled jewelry, although Maven will never hear about the illegal mead-trade and Romlyn will remain an employee of the meadery indefinitely.

When you talk to the townsfolk of Riften, you will find that at least one of them is a former employee at the Meadery, specifically Wujeeta who will say: "I used to work at the Black-Briar Meadery, but Indaryn and I never saw eye-to-eye. That elf has no patience at all." Inside the meadery, the skooma-addicted Niluva Hlaalu will plead: "If Indaryn finds out, he'll have me thrown out of the Meadery for certain. So don't breathe a word of it to him. Not a word!" She will also complain about Indaryn to Romlyn Dreth, while Ungrien will complain about Indaryn singling him out for criticism to his colleagues, Valindor and Tythis Ulen: 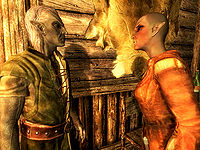 Ungrien: "I don't know if I can stand the abuse here much longer. They treat us like outcasts."
Valindor: "The Dark Elves and the Wood Elves have never been the best of friends. Be patient, they'll come around soon enough!"
Ungrien: "Wretched Dark Elves. It's just my luck I ended up working under one of them."
Valindor: "Chin up, Ungrien! Remember, you have a roof over your head and food in your belly thanks to the very same Dark Elves. Be thankful."

Ungrien: "I can't take it anymore, Tythis. Indaryn keeps pushing me around and I'm not even doing anything wrong."
Tythis: "Maybe it's time you quit then."
Ungrien: "And do what? Losing a job from the Black-Briar family would make me a marked man. No one would ever take me on anywhere else."
Tythis: "Don't let it get you down. Indaryn will eventually tire of picking on you and move on to someone else."

During the quest Caught Red Handed, you will discover the whereabouts of the promiscuous Dibella-worshipper Haelga. When handing you the quest, Svana Far-Shield will tell you that Haelga recently slept with no less than three different men, leaving them all with a Mark of Dibella as a token of her affection. She will then task you: "You need to get the Marks of Dibella from Bolli, Hofgrir and Indaryn. Not sure how you're going to do that, but try your best." When confronted with this accusation, Indaryn will become enraged: "You're crazy! How dare you make such an accusation!" You can then either persuade, intimidate, or give up. Note that your Speech skill must be at least 50 for a successful persuasion: