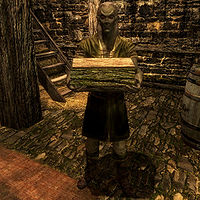 Romlyn wears a set of farm clothes and a pair of boots. He is equipped with a leveled dagger which can be up to elven quality. He carries two different keys (see notes), three lockpicks, and a selection of common loot and gold. He only knows a single Destruction spell, specifically flames.

While at the meadery, his fellow worker Niluva Hlaalu may talk to him about Indaryn's threats:

Sometimes, his boss Indaryn may try to confront him in The Bee and Barb:

Indaryn: "Romlyn, I've been meaning to speak to you. I did a count at the meadery and we're four cases short... again."
Romlyn: "What are you saying? You think I had something to do with that?"
Indaryn: "I'm not accusing you of anything. Yet."
Romlyn: "The Dreth family doesn't steal, Indaryn."
Indaryn: "For your sake, I hope you're right. Because if it is you, and Maven finds out, the Dreth family is going to be one member smaller."

At other times in the inn, Romlyn can be seen suggesting a plan to his boss:

Romlyn: "So, what do you think of my plan. You in or out?"
Indaryn: "If you think I'd would make a move like that without asking Maven, you're out of your mind. Doing that would be a fatal mistake."
Romlyn: "Come on, think about it. She'd reward us!"
Indaryn: "If you want to go out to Whiterun and burn that meadery down, go right ahead. And when the guard traces it back here, and Maven is implicated, I'll be sure to tell her it was your idea."

Romlyn may also be seen having some interesting conversations with Keerava:

Romlyn: "Have I told you about Valen, my dear?"
Keerava: "I love when you spin that yarn. Gets better every time you add something new."
Romlyn: "He killed six Imperial Guards before they dragged him into the prisons."
Keerava: "Was this before or after the Mythic Dawn attacked the Emperor and Valen single-handedly fought them off? Just shut up and drink, Romlyn."

This Skyrim-related article is a stub. You can help by expanding it.
Retrieved from "https://en.uesp.net/w/index.php?title=Skyrim:Romlyn_Dreth&oldid=2481899"
Last edited on 10 September 2021, at 16:01