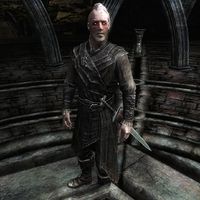 Lokil is a Nord vampire found in Dimhollow Crypt, particularly in the Dimhollow Cavern section which is inaccessible before Awakening. He will be interrogating Vigilant Adalvald about how to release the artifact sealed within Dimhollow. After failing to extract information from him, Lokil will kill him. He will immediately become hostile on detection.

Lokil's appearance and equipment are randomly generated to that of a Master Vampire. However, his voice always remains the same.

When you enter Dimhollow Cavern, you will overhear a conversation between Lokil, Vigilant Adalvald, and another vampire. Getting too close will interrupt the conversation, either way Adalvald will be killed: 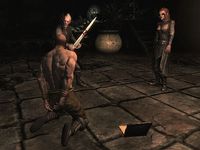 "So go and meet your beloved Stendarr."

Adalvald: "I'll never tell you anything, vampire. My oath to Stendarr is stronger than any suffering you can inflict on me."
Lokil: "I believe you, Vigilant. And I don't think you even know what you've found here."
[Lokil draws his weapon and strikes Adalvald]
Lokil: "So go and meet your beloved Stendarr."
[Lokil sheathes his weapon and walks towards the stone structure, shortly followed by the other vampire]
Vampire: "Are you sure that was wise, Lokil? He still might have told us something."
[Lokil will interrupt the other vampire]
Vampire: "We haven't gotten anywhere ourselves with..."
Lokil: "He knew nothing. He served his purpose by leading us to this place. Now it is up to us to bring Harkon the prize. And we will not return without it. Vingalmo and Orthjolf will make way for me after this."
Vampire: "Yes, of course Lokil. Do not forget who brought you news of the Vigilants' discovery."
Lokil: "I never forget who my friends are. Or my enemies."

At this point, Lokil will be walking around the stone structure, inspecting it closely to look for clues on how to get the artifact. He must be killed in order to progress, as he will automatically detect you when you activate the button in the middle of the structure.

After entering Dimhollow Crypt, he is first mentioned by two vampires who are discussing Vigilant Tolan's death, commenting on the fact their mission is taking too long. You can deduce that Lokil is their superior, and that he's working for Harkon: