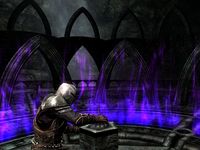 Having been given your assignment from Isran, go investigate Dimhollow Crypt. As you enter the first room you will overhear two vampires conversing. Accompanying the two vampires is a single death hound. Here you will find the body of Vigilant Tolan near the bodies of two dead vampires. You will also notice a closed gate that is blocking progress deeper into the cavern. After disposing of the vampires and their death hound, turn your attention to the opposite side of the room from which the closed gate is located, where you will see a stone structure. Enter it to find a number of useful items, including a leveled sword in a draugr coffin and a couple of leveled potions. At the top floor of the structure you will find a pull chain that opens the gate at the other side of the room.

In the next room you will encounter a leveled vampire accompanied by several skeletons. Defeat or sneak past them. At the top of the stairs where this vampire is, you can head right along the ledge past the standing sarcophagi for an unlocked chest with a small amount of gold and a potion; to the left you will find another gate with glowing mushrooms growing on either side. In the chamber on the other side of the gate you will find a few dead draugr and an arcane enchanter. To the left of the entrance is another unlocked chest. Head down the stairs on the right side to find a vampire and its death hound companion battling some draugr. After dealing with any remaining enemies head down another staircase to find a room with four gated doors, each of which can be opened by pulling the chain next to it. The hallway straight ahead leads to a pedestal with two leveled potions on it as well as a few more potions to the right and left of the cage which can be retrieved using telekinesis. The first door on the left leads to a master-locked chest, the door on your right opens to a leveled draugr, and the fourth door, to the left of the altar door, leads to the next chamber. 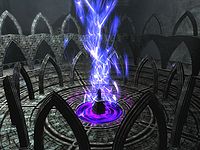 As you enter Dimhollow Cavern you will overhear the vampire Lokil interrogating Vigilant Adalvald, who will die before revealing anything to his captor. After Adalvald dies, Lokil, his thrall, and an accompanying vampire will become hostile towards you as soon as they detect you.

After killing them, make your way to the circular stone structure that dominates this chamber. Pressing the button atop the pedestal in the center will cause a spike to emerge, impaling your hand as a purple light shines up from troughs in the floor. Push each of the movable braziers into or away from the center of the circle so that they touch the end of the purple light within their path, causing the pattern to expand towards the next brazier, until you connect them all. The center of the structure will then descend to reveal a stone monolith beneath the pedestal, which contains a mysterious woman carrying an Elder Scroll. Upon speaking to the woman, she will tell you that her name is Serana and that she is a vampire. She will ask you to take her to her family home, Castle Volkihar, northwest of Solitude. Asking her a few questions will reveal that she is not very trusting of you, but she does reveal that she has been imprisoned for a very long time, since even before the rise of the First Empire of Cyrodiil (i.e., about 4,200 years before current events). Once you finish your conversation with her, the quest completes and the next one begins.