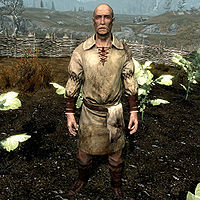 Lemkil is a Nord farmer working hard to make a living in the small farming community of Rorikstead. He is the widowed father of twin daughters, Sissel and Britte, and has passed his bitterness on to his children. Despite his unhealthy attitude, he will pay you for harvested cabbages, leeks, and potatoes.

He sleeps in his farmhouse every night between 10pm and 6am. After waking up he ignores his children and goes straight to work in the field behind his house, for twelve solid hours. At 6pm he enters Frostfruit Inn for some dinner and relaxation before he returns home and goes to bed at 10pm.

He wears a set of barkeep clothes with a pair of shoes, and carries a belted tunic, the farmhouse key, an iron dagger, and an assortment of common items and gold.

He is obviously angry and will immediately advise you, "Do yourself a favor and don't have children. They're good for nothing at all." and follow it up with, "I got enough troubles, so don't go adding to them." He will then start to speak about his twin daughters and reveal the real reason behind his bitterness: "I spend every day tending the fields, and what do my daughters do? Nothing! Complain and caterwaul! Sleep and eat! Useless!" and "Curse my good-for-nothing daughters! My wife was twice the woman they'll ever grow to be. She gave her life birthing them. What a waste."

The townsfolk of Rorikstead are all concerned about his unhealthy influence on the children, and a group of citizens will try to calm him down:

Jouane: "Good day, Lemkil. I saw some nice dresses for your little girls while I was in Whiterun. I'd be happy to purchase them, if you like."
Lemkil: "We don't need your charity, Breton. If my girls deserve something nice, it'll be their father who buys it."

Rorik: "Those little girls of yours are growing like weeds, Lemkil."
Lemkil: "Yes, and just like weeds, they're nothin' but trouble."

Mralki: "Your daughters are growing up fast, Lemkil. Seems like only yesterday they were newborn babes."
Lemkil: "They've grown, all right - lazier and more stupid."
Mralki: "There's times I think you're the coldest man in Skyrim. This is your own flesh and blood you're talking about."

Erik: "I'm not saying it's my business, but I have to ask. Why are you so cruel to your little girls?"
Lemkil: "You're right, it's none of your business. How about you keep your nose out of it?"
Erik: "You keep on like you are, you'll end up with two daughters who hate you."
Lemkil: "Hah! And what would a witless oaf like you know about raising children?"