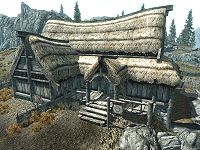 Frostfruit Inn is a tavern and popular gathering point in Rorikstead. It is located in the center of town, between Rorik's Manor and Cowflop Farmhouse.

Mralki tends the counter, buying and selling food and drinks and renting out rooms for 10 gold. It consists of one area only, Frostfruit Inn. 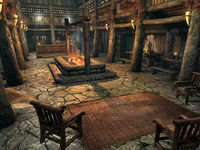 Like many other taverns in smaller settlements, Frostfruit Inn consists of a huge taproom with a fireplace in the center and the counter in the opposite end of the room from the entrance. Several wooden tables are scattered around, all of them set with food and drink. In addition to the taproom, the inn also has three smaller rooms with a total of four owned beds, one of them reserved for paying customers.

To the right of the front door, in the southern corner, is the first table which is dressed with two salmon steaks, an eidar cheese wedge, some sliced eidar cheese, a goat cheese wedge, a goat cheese wheel, some bread, and one bottle each of wine and alto wine. In the corner stands a single food barrel, while two similar barrels can be found in the adjacent corner to the east. Next to the barrels are another table with two loaves of bread, and more wine and alto wine, two bottles of each. The next table contains exactly the same. The last table along the northeastern wall holds three loaves of bread, a bottle of wine and two of alto wine. Next up is a set of shelves with four potatoes, two elves ear, five bottles of wine and four of alto wine. Additionally, the shelves also holds seven bottles of Nord mead. The last table for paying customers can be found between the entrance door and the nearest room, which can be used by either Mralki or Erik. The table has two chicken's eggs, two loaves of bread and, in a basket on the floor, three pine thrush eggs.

The bar takes up most of the northwestern part of the taproom and Hralki can be found behind the counter 24 hours a day. On display is some sliced goat cheese, a bottle of wine, and a bottle of alto wine. Hidden on the shelves underneath the bar are five gold coins, a steel warhammer, three coin purses, eight bottles of Nord mead, a bottle of wine and one of alto wine. There is also a basket with a goat cheese wedge, an eidar cheese wedge and an eidar cheese wheel. In the northern corner is a set of shelves with two bottles of alto wine and six of regular wine, along with four loaves of bread. Hanging from the ceiling, above a single food barrel, are no less than eleven dead rabbits and six pheasants.

The room you can rent is located to the northeast and contains two beds, a dresser with random clothes, and two bottles of alto wine on top, and an empty chest. The bed you can rent is the one in the northern corner. Adjacent to this room are two even smaller rooms, both of them located to the southwest. The room on the left contains a wardrobe with clothes, a chest with minor loot, and a bottle of Black-Briar Mead. The room to the right belongs to Erik and contains a dresser with clothing and a chest with minor loot.

This is the merchandise found in Mralki's merchant chest. These items are only available if purchased from the merchant; they cannot be pickpocketed or stolen. They are restocked every two days.