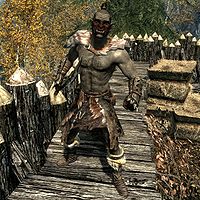 Gularzob is an Orc warrior found in Largashbur, the Orc stronghold of the Rift. At first, he's just a simple guard but then becomes chosen by Malacath to be the new Chieftain after the curse on Largashbur has been lifted. Even he is confused why Malacath has honored him to replace Yamarz, but vows to try his best to live up to the Orc code.

As chief, his appearance and daily routine do not change much at all. He still patrols the stronghold daily and sleeps in the longhouse.

He wears some fur armor along with Stormcloak officer bracers and a pair of hide boots. He wields a leveled war axe, which can be up to Orcish in quality starting at level 6.

Before the curse has been lifted, he will express confidence in Yamarz's leadership skills as the Chieftain: "We have sworn loyalty to Yamarz. He will see us through these dark times." After the curse has been lifted and he is made Chieftain, he will state that he did not expect to be given the title: "I will do my best to lead the tribe, but I don't know why Malacath chose me." He appreciates being given the title, but questions if he's ready to take on such an important role: "I am honored to have been chosen to lead. But I know that being picked by Malacath does not mean that I am ready." He does know that he will be loyal to the tribe, unlike the previous Chieftain: "Yamarz betrayed us all. I will never allow that to happen again, so long as I rule." He also appreciates the service you did for Largashbur and will often remind you: "Do not raise arms against my people, and you shall always have a place here, Champion of Malacath." He will also discuss his respect for the advice Atub provides him with: "Atub is wise beyond her years. I take her advice seriously, and you should as well."