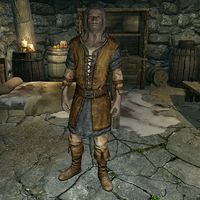 Kraldar is a Nord citizen of Winterhold, who will replace Korir as Jarl if the Imperial Legion takes control of the city. Before becoming Jarl, he will simply stay in his house all day with his servant Thonjolf. After being named Jarl, he will relocate to the Jarl's Longhouse down the street, where he will, again, remain for most of the day, holding court, although he will leave for evening meals at The Frozen Hearth across the road. If the Stormcloaks retake Winterhold, Kraldar and Thonjolf will be exiled to Erikur's House in Solitude.

Unlike Korir, Kraldar is sympathetic to the College of Winterhold, and does not blame the "Great Collapse" on its mages. In fact, he defends the College whenever asked about the Great Collapse. He also claims that he and Arch-Mage Savos Aren are personal friends, although Aren never mentions him.

Kraldar wears a set of farm clothes and a pair of boots. He carries the key to his house and a selection of common loot and gold. In combat, he relies on an iron dagger. 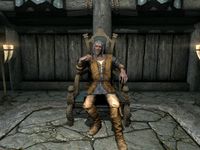 "With the Empire's help, Winterhold will be back on its feet in no time."

If you are near him, he may say things like "Winterhold may not look impressive, but it has a very rich history.", "Winterhold was once the capital of Skyrim, you know. Quite an honor.", "I'd like nothing more than to see Winterhold regain its former glory.", "It's hard to recover from something like the Great Collapse, but I believe Winterhold can do it.", "The College of Winterhold is truly an asset to our city... err, town." If Arch-Mage Aren is not yet dead, Kraldar may say, "I have a very close relationship with Savos Aren, the current Arch-Mage." As Jarl of Winterhold, he will have more greetings: "With the Empire's help, Winterhold will be back on its feet in no time." and "There's yet hope that our relationship with the College can be repaired."

During Containment, when you are told to eliminate the Magic Anomalies infesting Winterhold, approaching Kraldar will have him say, "Whatever it is you're up to at the College, you need to fix this at once!"

If asked, he will deny that the College is dangerous. "Goodness, no! They're simply scholars, they mean no one harm. I've had... several conversations with Arch-Mage Aren over the years. He's perfectly polite, if a bit guarded." Note that you cannot ask him this if he is Jarl of Winterhold.

You can talk to Kraldar if you'd like to know more about Winterhold's history, and he will happily oblige: "I'm afraid the Winterhold you see before you is somewhat... underwhelming. I can assure you, though, that it was quite something in its prime. An early capital of Skyrim, you know. Sadly, the Oblivion Crisis took its toll on Winterhold, in more ways than one. Then, the Great Collapse swallowed most of our beloved city."

He'll also tell you how the Oblivion Crisis impacted Winterhold, should you inquire. "You may have noticed the College, just to the north there. Very prestigious place. Mages from all over Tamriel traveled here to seek knowledge. After the Oblivion Crisis was over, many felt that magic users were to blame. Elves, to be specific. It created a great deal of tension. A good many dark elves were driven from the city, and people became... uncomfortable with the presence of the College."

You can also ask him about the Great Collapse, which Kraldar will describe, "Just about eighty years ago, there was a terrible disaster. The cliffs overlooking the Sea of Ghosts collapsed, taking most of Winterhold with them. In the middle of it all, the College was practically untouched. Many of the survivors were suspicious. Some believed the mages were behind the whole thing, and others felt they could have at least prevented it. Arch-Mage Aren assures me that his people had nothing to do with it, and I believe him. But Winterhold never recovered."

The publican at The Frozen Hearth, Dagur, will comment on Kraldar's rule after he becomes Jarl: "Turns out who runs Winterhold doesn't change much. Can't say I'm surprised." and "I won't complain about Korir being gone, but I don't expect things to really be any different." Ranmir, the local drunk, will weigh in on the new government, too: "Empire's in charge now, huh? Only a matter of time before we start getting bothered by them Thalmoricars... err, Justimors... Y'know, them elves". Thonjolf, now Kraldar's housecarl, can be found remarking on how Kraldar keeps Malur Seloth in his court, saying, "I'm not one to complain, but I'm not sure why Kraldar insists on keeping Malur Seloth around."

Whether or not he is jarl, Kraldar will often end up chatting with Thonjolf out of boredom:

Kraldar: "So, what's the latest exciting news about goings-on in Winterhold?"
Thonjolf: "There is no news, I'm afraid."
Kraldar: "None? Nothing at all? Nothing from the College, even?"
Thonjolf: "I shall inform you the moment something noteworthy happens."
Kraldar: "Yes, that'll be fine. Thank you."

Thonjolf: "Will you be needing anything special today?"
Kraldar: "Why don't you see if Arch-Mage Aren is interested in joining me for a meal?"
Thonjolf: "Again? Are you sure? He still hasn't answered your last several requests."
Kraldar: "Well, he's been very busy. Perhaps today he'll have some free time."
Thonjolf: "As you wish."