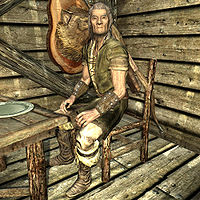 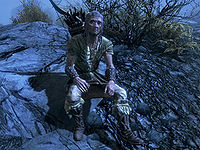 Froki Whetted-Blade is an elderly Nord ranger who lives in his shack alongside his grandson Haming, a survivor of the attack on Helgen. Haming's parents, Torolf and Matlara, died at Helgen. Froki wears middle class clothes, hide bracers, hide boots, Kyne's Token, and a Ring of Minor Archery. He is equipped with a hunting bow and five iron arrows.

When you first meet him, he will express his dislike for city people, saying "Just what we need. City folk barging in, probably looking for an offering to their precious Divines." or "Well, look at this. Another city rat crawled outside the walls. I don't suppose you've come up here to tell old Froki about your supposed Divines?" If you ask him what's wrong with the Divines, he will reply "They're stolen idols! Imposter gods, sold by silver tongues. No thank you. Froki will not forget Kyne, or her Sacred Trials."

Froki is opposed to worshipping the Imperial Divines: "Those sycophants in the Temple would call her Kynareth. Just a pale shadow of the truth, like all the Temple Divines. Kyne! Blessed Warrior-Wife. Shor's widow, sacred to any true Nord hunter. She's the mother of men and beasts, and her veil is the storm."

If you ask him about the Sacred Trials, he will explain by saying "It's an old Nord Tradition, a test to prove your worth in the eyes of Kyne. Show that you're a hunter and no simple butcher. Kyne teaches us to respect the beasts and blesses the hunter who will face their champions. True Nord hunters are those who survive the Trials." He will then ask you to kill a number of creatures to prove your strength and earn his respect: "Do you think you're strong enough for Kyne's blessing? I would be glad to pass this tradition down."

If you find Froki's bow in Graywinter Watch, you can mention the bow to him after completing the quest. He'll be surprised to see it, saying "I don't believe it. I made that bow myself. Been through some messes with it, let me tell you." He will then decide you deserve to keep the bow, saying "You know what? I want you to keep it. My great hunts are behind me, but yours are yet to come."

During Kyne's Sacred Trials, you can ask Froki if Haming is his son. He will correct you, saying, "Grandson. He's a strong lad. His parents were at Helgen when, well you know." Further asking him if he likes having Haming around will have him confess, "Can't say I was a great father the first time around. Now that he's here it's like a second chance. He's a good lad."

This Skyrim-related article is a stub. You can help by expanding it.
Retrieved from "https://en.uesp.net/w/index.php?title=Skyrim:Froki_Whetted-Blade&oldid=2192783"
Last edited on 8 August 2020, at 03:22