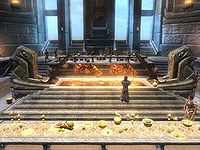 Inside the Hall of Valor

You are transported to a misty realm filled with statues of Nord warriors. The mist has no noticeable effect on you and can be temporarily cleared with the Clear Skies shout, but it quickly rematerializes. Upon continuing down the stone steps, you may be stopped by a Stormcloak soldier who says that the mist is extremely dangerous and that you should not go into it. He died fighting the Imperial Legion, and all his companions have been swallowed up by the mist, where he says Alduin lurks, devouring souls. He also tells you that at the end of the valley of mist lies Shor's Hall, where the heroes of Sovngarde gather. He begs you to allow him to follow you.

True enough, Alduin will periodically swoop in and grab a fallen Stormcloak or Legion soldier in the misty valley. On the way, you may encounter historical figures such as High King Torygg and Svaknir, along with NPCs that have died in the course of the game, such as Kodlak Whitemane, Ulfric Stormcloak, Legate Rikke, or Galmar Stone-Fist. Once clearing the mist, you'll reach the edge and be stopped by the gate guardian, Tsun. He challenges your right to enter the Hall of Valor and declares that you must prove your worth in a warrior's duel regardless of the right that you claim. The first claim 'by the right of birth' will always appear regardless of what you have done in the game, but the remaining ones can only be used if you have completed the quests of the Companions, the College of Winterhold, the Dark Brotherhood and/or the Thieves Guild, respectively.

He is fast and deals an enormous amount of damage, so if you are having trouble beating him, you can run back down the steps and into the water, as he will stand at the edge and be unable to attack you. Fire spells work particularly well against him. You do not need to initiate conversation in order to earn entrance, which provides an opportunity to do ranged attacks from the start.

Inside, you are greeted by Ysgramor, founder of the Companions and harbinger of men, who asks you to speak to the Nord heroes of old who battled Alduin (as seen in the Elder Scroll): Gormlaith Golden-Hilt, Hakon One-Eye, and Felldir the Old. The Hall is filled with Heroes of Sovngarde, including some very notable ones like Jurgen Windcaller, Olaf One-Eye, and Ulfgar the Unending. When you meet with the three heroes that you are directed towards, they decide to join Shouts with you to clear the mist from Sovngarde. The quest ends with you running out to join them near the misty valley.