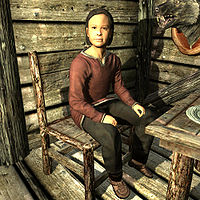 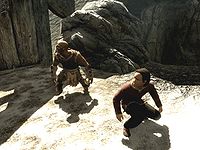 Haming is an eleven-year-old Nord child who lives in Froki's Shack. Originally from the town of Helgen, he moves in with his grandfather, Froki Whetted-Blade, after Helgen is destroyed. He is the son of the late Torolf and Matlara, who are killed by a dragon during its attack on Helgen. Haming is one of the few people to make it out of Helgen alive after the dragon attack. He is described by Froki as a good and strong lad.

Haming wears red colored child's clothes and a pair of shoes, and is equipped with a simple iron dagger.

You first encounter Haming in the opening sequence, expressing his desire to watch the Imperial soldiers and the prisoners at the beginning of the game. However, his father sends him inside:

Haming: "Who are they, daddy? Where are they going?"
Torolf: "You need to go inside, little cub."
Haming: "Why? I want to watch the soldiers."
Torolf: "Inside the house. Now."
Haming: "Yes, papa."

If you encounter him at Froki's Shack, he will claim that he can beat you up despite being only eleven: "I'm eleven years old, and I could take you." In an alternate greeting, he says "Someday I'm going to kill a dragon all by myself."

You can ask him whether he likes living here, and he will reply, "It ain't so bad. I miss living with my parents back in Helgen, though. Froki can't cook and there's nobody to talk to up here." If you ask if his parents were killed at Helgen, he will confirm, "Yeah, but don't say anything about it to Froki. I don't think he understands." If you try to avoid the subject, saying only "Oh, I see", he will instead respond with "It's okay, I know what happened at home. With the dragon and all."

If you ask him to tell you about himself, he will say in frustration, "Froki won't let me hunt on my own yet, but he never shuts up about killing his first stag when he was eleven."