To perform the ritual of Mania, the current Duke Thadon must overdose on Greenmote. Then, to become Duke or Duchess of Mania, you must collect his drug-tainted blood and place it upon the altar of Arden-Sul in the Sacellum.

Raise Wide-Eye's disposition to at least 60 and she will tell you her daily routine. Every day at midday, she performs a special errand, traveling from the Halcyon Conservatory to the banquet hall in the House of Mania. At about 3pm-4pm she exits the House to the Palace Grounds to begin the next stage of her 'errands'.

Following Wide Eye during the latter stage of her "special errand" will lead you to a secret statue, located on the northeast side of the Palace courtyard; the hidden front to Thadon's Greenmote Silo. Watch her activate the statue and enter after her. She does not leave the silo until you retrieve the Greenmote.

Enter the Greenmote Silo and make your way to the Greenmote pile, located in the far east corner. All of the guards inside the silo will arrest you if you are detected, so sneaking, invisibility or chameleon are advised. The route to the right may be easiest, as the center route is guarded by three Golden Saints. Wide-Eye will be located inside the Greenmote storage room. Activate the Greenmote pile and obtain two samples before leaving. If you are feeling brave, you can pickpocket the House of Mania Key from Wide-Eye, which will help later on. 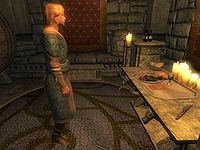 Pick or open the leveled lock to the Duke's quarters. Sneaking is advisable, since you will have to get past two Golden Saint Guards. Although it is possible to kill both while only incurring a bounty of 5 gold, sneaking is relatively easy. The kitchen is located at the end of the corridor to your left once down the steps. Before you sneak in, wait until the time is close to twelve o'clock in the afternoon. If it is three o'clock or later when you attempt this, Thadon's meal will not appear on the table and his wine will not appear on the rack. Wait until the guard passes you before proceeding or use invisibility potions. Make the first left turn and hug the left side of the pillared hall, ducking into the first dark area to your left. After the guard returns and passes, her companion enters the bedroom that is now slightly left ahead of you. You need to time your movement so no guard will see you as you move further down the hall. Duck into the last dark area on your left, which is directly across from the kitchen. Finally, once the guards move, enter the kitchen.

Activate the food and wine to add your greenmote to each. The wine is upright with the other bottles on the shelves, on the left side of the middle shelf. Now wait in the dark area to the right of the wine rack until the guard reenters and leaves. Go to the corner of the kitchen and wait for the second guard to come into sight before heading back down the hall. Retrace your earlier path to make your escape. Exit the Duke's Quarters and return to the Mania throne room at 8pm, and sit down. Thadon will eventually rise and start to recite a soliloquy. In the middle of the soliloquy, the duke collapses, overdosing on his beloved Greenmote.

Take his blood and make your way to the Sacellum. Be sure to take the Diadem of Euphoria from his body after you take the blood, as well as any other loot you want, as the body will disappear when the quest ends. Activate the altar, and talk to Dervenin, who will proclaim you the Duke/Duchess of Mania. Talk to Sheogorath, who will appear in the pews near the back of the Sacellum. Shortly thereafter, Syl will enter and argue with Sheogorath, revealing that The Fringe is under attack, and that she intends to defect to the Forces of Order. After her exit, Sheogorath will present you with the Ring of Lordship and the power to summon a Golden Saint for 60 seconds, once a day.