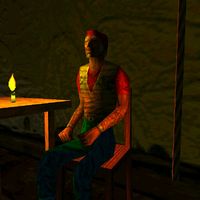 Favis in the Bell Tower

Favis is a slightly deaf old man residing in the Bell Tower on Stros M'Kai. He works together with Prnell to signal the arrival of new ships in the harbor. Prnell spots them from the Harbor Tower and waves a flag, which is Favis' cue to ring the bell.

If you mention the bell, he will claim that it doesn't ring as loud anymore. Prnell told him nothing was wrong with it, but Favis disagrees and asks you to fix it. When you climb up the rope to take a look at it, Cyrus confirms that the bell is undamaged. Despite telling him otherwise, Favis will think you fixed it and thank you for the favor.

"A swordsman, eh? Well, work your sweat, then. Don't bother me none."

Attempt to ring the bell and it's not ringing:

"*Don't* touch that bell rope! Unless you want to be remembered as the cowardly villain who murdered a kind and dutiful old man just so he could play the fool with that good man's bell."

Attempt to ring the bell while it's ringing:

"That Rollo. Sometimes I have to ring the bell a good five minutes before he wakes up and gets moving."

Wave flag in front of him:

"Greetings, old man. I am Cyrus."
"Cyrus, eh? Never heard of you. Must be new around here. My name's Favis. Everybody just calls me Favis though."

If you agreed to fix bell but have not looked at it yet:

"Thought you said you were going to fix my bell. Hmm? Hmm?"

"Favis, how are you doing?"
"Been better, been worse."

"My sister, Iszara, is missing. Do you know her?"
"Sure, nice young lady, too. Sister, you say? I haven't seen her around in a while though. Wonder if she might be missing."

"Apparently no one has seen her for months. Do you have any idea what might have happened?"
"Might have something to do with the Restless League. Some of them fellows came around looking for her a while back."

(Unlocked by "Iszara is Missing")

"Iszara was in trouble with the Restless League?"
"I didn't say that, although come to think of it, they didn't look too friendly.
"No one you'd want to cross, that's for sure. Their enemies have a way of turning up dead."

"My ship was attacked by two members of the Restless League just off Stros M'Kai. What can you tell me about them?"
"Not much. Fire-eating Redguard nationalists-- more even than most Crowns could stomach.
"But they've kept quiet since the Old Quarter was burned. I wonder why they decided to attack your ship?"

"Stros M'Kai was a Crown stronghold, wasn't it?"
"It was the seat of power for the Crowns. A'tor led the Crowns from here after Thassad's death.
"We've suffered greatly for it since young Prince A'tor died. Took all hope out of the Crowns, but not all the fight."
"Not all?"
"No, the battle in the Old Quarter did that."

"What happened to Prince A'tor?"
"Died in battle, like a Redguard hero of old. I've heard tales that he ain't dead, but that's all rubbish."
"Really --"
"I spoke with sailors from the Garamar, second in line of battle behind A'tor's flagship.
"They saw him on deck just as the dragon lit up his ship like a festival bonfire. Weren't any survivors from the flagship, not a one."

"King Thassad's death was inconvenient for many, but I've never heard tell of foul play."
"Nor I. The Forebears preferred Thassad to his son A'tor, a known League sympathizer. Thassad had no patience for the League himself.
"Called them terrorists -- maybe true, but they've shown more sense than the Crowns through this whole bloody mess."

"I expected to see Stros M'Kai full of Forebears, after their victory."
"Hardly a Forebear victory. It was Imperial might that defeated the Crowns, laddy, make no mistake about that.
"The for-show few that Richton brought with him mostly stay up in the Palace or drink themselves to stupor.
"You might run into 'em at the Draggin Tale, looking for trouble, so you'll want to be careful."

If you have brawled the Forebear thugs:

"I've already run into them, thanks. Nice lads."

"Tell me what happened in the Old Quarter."
"The Crowns made their last stand there after the dragon destroyed A'tor's fleet. Senseless bravado -- should've done what the League did,
"and laid low until the Imperials were off guard. Instead they went down fighting, Redguard heroes but dead all the same."

"I don't know. How long has it been since their last attack?"
"Hmm. Must've been a month or two, at least. Their last big success was blowing up Richton's flagship, right here in the harbor.
"A pity, in a way. Whatever else you say about the Imperials, they make beautiful ships. But that little caper cost the League plenty.
"Afterwards, Richton rounded up anyone who'd ever spoken to a Leaguesman.
"I was starting to think he had crushed them completely."

"You're not in the Restless League?"
"Me? Ha! If I was, do you think I'd still be here, with precious Governor Richton throwing every known Leaguesman in the Catacombs? In my day things were simple.
"A Redguard was loyal to the king and that was that. All this new-fangled politics -- Crowns and Forebears, Restless League -- not for me."

(Disappears when you agree to fix bell)

"You're in charge of this belltower?"
"Don't want to be, but I'm stuck with it. Damn Prnell's fault. Leaves me stuck here while he sits up in the cool breeze and watches Hundin Bay roll by.
"Doesn't he think I'd like to wave the flag once in a while? Stubborn as a mule, he is, and ungrateful to boot."

"Prnell...? A friend of yours?"
"Friend? Ha! Blind as a bat, he is, but will he ever let me wave the flag? No. Too stuffy down there, he says.
"You'd fall off the chair, he says. Always some excuse. Now he's gone and broken the bell. Don't know why I put up with him."

"I'm not sure I follow you. What flag do you mean?"
"We're supposed to trade off. One of us watches for ships, waves the flag when he sees one, then the other rings the bell to let people know.
"But he never lets me take my turn in the watchtower. Doesn't care about my feelings, not at all.
"Always about what Prnell wants. Hmph!"

"The bell doesn't look broken."
"Well, not broken exactly, but I'm sure it doesn't ring as loud as it used to."
"But Prnell wouldn't let me have Lakene look at it, would he? Insisted on doing it himself. Typical."
"Took him half the day, then had the nerve to tell me there's nothing wrong with it!"

"I'm not sure if I've met Lakene."
"Me neither. Now that Lakene on the other hand -- handiest young fellow I ever met.
"Can fix anything. Hey, you look like a handy sort yourself. Maybe you could take a look at it for me?"

"I don't know too much about bells, I'm afraid."
"Neither does Prnell, but that didn't stop him, did it? Oh well."

(Unlocked by looking at bell)

"I checked, and there's nothing wrong with the bell."
"Good lad! I was right! That fool Prnell said it didn't need fixing, but I knew it needed fixing. So you fixed it, eh? Well, I'm much obliged."

"How do things stand in Stros M'Kai, under Imperial occupation?"
"As bad as they can be. Looks peaceful now, doesn't it? The peace of the grave, it is -- most of the younger folk dead or run off.
"In the old days, this was the bustling south heart of Hammerfell. Harbor jammed with shipping, sailors from all over walking the streets.
"What you see now is the ghost of the old Stros M'Kai. Dead but it just don't know it yet."

(Unlocked by "League Member" or "Dragon")

"This dragon -- have you seen it?"
"Not with my own eyes, but I heard tell of it from the survivors. They say Richton keeps it in the Catacombs, feeding it on captured Leaguesmen."

(Unlocked by "League Attacked My Ship" or "Catacombs")

"What can you tell me about Governor Richton?"
"You don't look like one of his spies."
"Rest assured."
"I'm too old to worry about such things anyway. Hmm. Why was I worrying?"
"Richton."
"Oh yeah: good soldier, maybe, but a bloodthirsty beast of a ruler. Enjoys having Stros M'Kai under his thumb, he does. Won't be much left of it when he's through."

"Your friend Gerrick, the shopkeeper, was telling me about you."
"My friend, you say? Hmph! All right as elves go, but sure does carry on.
"Then there's that Rollo, Gerrick's hired hand. Rude as the day is long, and lazy to boot."

"This Rollo sounds like an interesting fellow."
"Sometimes I have to ring the bell a good five minutes before he wakes up and gets moving.
"Gerrick has me watch out to make sure Rollo's up before I stop ringing the bell.
"Don't know why I don't just go give him a kick in the pants, be easier."

(Unlocked by Prnell: "Watch Tower" if you haven't found the eyepiece)

"Prnell said that he lost his eyepiece. Have you seen it?"
"That's just perfect! He's as blind as true love without his eyepiece! I guess the only way he can see is through his damn telescope now!"
"So you haven't seen it, then?"
"No. He'll never leave the telescope chair now! And I'll never get to wave the flag!"

"That's all for now Favis."

Two lines that may have been used idly after "Bell is Working":

"You see? Hardly makes a sound, does it? And Prnell says there's nothing wrong. Hmph!"
"Much better! Thankee, laddy."