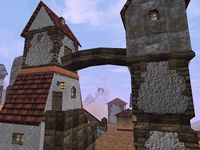 The Harbor Tower is a building at the Stros M'Kai docks, near where Kotaro sits, which consists of two connected towers. The south tower has a door on its east side, but this remains permanently locked. The north tower's door is up a set of stairs on its south side.

Prnell sits at the top of the south tower and keeps a lookout for ships entering the harbor using his telescope. When he spots one, he waves a flag from the balcony connecting the two towers to signal Favis in the Bell Tower to ring the bell. He will let you borrow his flag if you find his missing eyepiece.

The south tower has three levels and you enter on the middle one. Stairs going up and down are found here, along with four barrels and a stack of five sacks. The downstairs room has a chest holding a pouch of 50 gold; the rest is full of clutter: more sacks, some crates, a coil of rope, an anchor, and the wheel to a ship. The room upstairs has a crate and four baskets, along with the door out to the balcony. Across the balcony, you can enter a small room on the top of the south tower where Prnell is located. The only object of note besides his chair and telescope is his flag lying at the base of the chair.