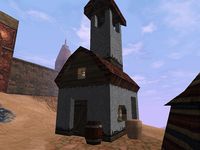 The Bell Tower is a building outside the plaza gate in Stros M'Kai, east of the Silversmith's. Favis works here as the bell operator, which he rings in response to Prnell waving a flag from the Harbor Tower to the southwest. The Bell Tower has two entrances, on the north and west sides. The only objects outside are a barrel and basket.

A single candle on a table next to Favis lights the small room inside. Two crates are stacked in the northeast corner and Favis sits on a chair in the southeast. On his left is a bell rope, which you can attempt to pull; however, this causes Favis to say something depending on whether the bell is ringing already. Hanging from the center of the room is a rope you can climb up to the bell. The camera moves and points downward when you are at the level of a small ledge, and Cyrus exclaims, "What's this?" On the ledge you can find a glass monocle.

If Favis told you that the bell is broken, at the top of the rope Cyrus will say, "Hmm. Nothing wrong with this bell. Just the old man's ears that need fixing." After this, you can report back to him, though he misunderstands and thinks Cyrus fixed the bell.