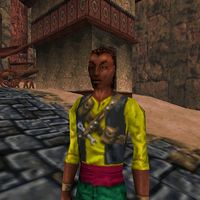 Lakene is a Redguard handyman in Stros M'Kai who can be found on the east side of town, often trying to fix a wagon. Talking to him reveals he has a great interest in Dwarven technology. Trithik also asked him to fix his boat because of Lakene's reputation as "Mr. Fix-it".

He lost his wife's silver locket playing cards with Rollo at the Smuggler's Den. Lakene will deny any knowledge of the Den until you reveal that you know about the locket (from Krisandra). The conversation ends and you cannot talk to him again until he has walked over to the cliff edge because he wants secrecy. If you ask for the password, he requests that you first bring the locket back to him.

The silver locket is found inside the chest in Rollo's house, but Rollo uses it as a seat so he must be away for you to steal it. Lakene will thank you for returning it to him and, true to his word, says the Smuggler's Den password is "spoon".

"Nice blade. But I don't like them waved at me, even in fun."

If you have given him the locket:

If you have asked "Give Me Password" but not given him the locket:

"Lakene."
"Have you found my locket?"

"Oh, it's a spell you're under. You'll need another wizard to fix that. Or hope it doesn't last forever."

"You know anything about a woman named, Iszara?"
"Iszara. Name sounds familiar. But I can't say that I do."

"What do you know about the Restless League?"
"Nothing. Who said that I did?"

"And what does Stros M'Kai hold for you?"
"I'm what everyone likes to refer to as Mr. Fix-it. I'm cursed by it actually.
"Oh... and by the way... if you see a man named Trithik, tell him I'll get to his boat when I have time."
"If I see the fellow, I'll tell him."
"And as for what keeps me in Stros M'Kai, with the Empire and Richton and all... well, I've lived here a long time, got friends and roots here --
"And Stros M'Kai has deep roots... ancient history... there's the real mystery."

"What's wrong with Trithik's boat?"
"Not sure, really. I think he's had some vandals at night."

"The real mystery? Huh, I've heard too many already."
"The ruins. In the mountains. Dwarves, sailor. Long dead. An ancient technological treasure trove.
"Empire's searching the world for such knowledge. They may have found it here."

"What does the Empire hope to find there?"
"Power! Before you know it we'll have steam-driven carriages and flying machines-whole Empire's interested in them Dwarves for some reason.
"Sure, sure, Prince A'tor, Arkay bless his soul, might've said they were dangerous and we should leave dead civilizations be, but, hell, man, there's progress to be made."

"Flying machines? Are you ok?"
"You wait! You just wait! Those Dwarves made up for their lack of magic in other ways. Magic is the crutch of the world!
"Why build a better bridge when a mage can teleport you to the other side? Things have been the same for thousands of years, and it's going to end soon."

"Steam-driven carriages, huh?"
"That's right. Dwarves knew how to use the steam. You may laugh, but it's a powerful force and Richton's got his boys looking at it right now.
"Empire may have what they need to conquer all of Tamriel sooner than you think."

(Unlocked by "Mystery" if you have asked Erasmo: "Burn Your Leg"; disappears when Observatory is fixed)

"You're good with a wrench, and know a lot about these Dwarves. Any ideas on fixing the Observatory?"
"If it's Dwarven, the answer's in the ruins. And I'm not about to challenge Richton's men up there."

(Unlocked by hearing about it from Gerrick, Mariah, Prnell, or Siona; disappears when "You've Been to Den" is unlocked)

"What do you know about the Smugglers Den?"
"I've never been there."

(Unlocked if you don't have the password but know you need one; does not appear if neither of the conditions below are satisfied)

Hasn't told you about Rollo:

"Do you know the password to the Smuggler's Den?"
"I don't know what you're talking about."

If he told you Rollo has the locket but you don't have it:

"I haven't been able to get the locket. Just give me the password."
"So much for Redguard honor! We had a deal, Cyrus. No password until I get that locket."

(Unlocked by Krisandra: "Lakene" if you haven't confronted him and don't have the locket; disappears once asked)

"I know you've been gambling at the Smuggler's Den, Lakene. And I need to get in there."
"Damn. Where'd you hear that?
"Look, that's not something I'm proud of, so keep your voice down. Let's move this conversation elsewhere."

(Unlocked by Krisandra: "Lakene" if you haven't confronted him and have the locket; disappears once asked)

"Ok, Lakene. Here's your locket. I know you've been gambling at the Smuggler's Den, Lakene. And I need to get in there."
"Damn. Where'd you hear that?
"Look, that's not something I'm proud of, so keep your voice down. Let's move this conversation elsewhere."

(Unlocked by "You've Been to Den"; disappears after you give him the locket)

"Gambling away your wife's silver locket? Not good. Tell me what I want to know. What do you know about Iszara, the League, and that Den!"
"Calm down, please! I know nothing. I've only been there to gamble a few times!
"I've heard the League goes there, but I ain't seen them or this Iszara woman! I swear. And if my wife finds out about the gambling... I'll be dead!"

(Unlocked by "Gambling at Den"; disappears after you give him the locket)

"Then just give me the password, and I'll take it from there."
"Sure, sure. But you gotta help me first, Cyrus. Please. Get my silver locket back from that Rollo cheater and I'll give you the password. I swear. Please."

(Unlocked by "Give Me Password"; disappears after you give him the locket)

"Rollo?"
"Smelly guy, cheats at cards. He won that locket through trickery, the foul dust-belly!"

(Unlocked if you have the locket)

"Ok, Lakene. Here's your locket. Now tell me the password."
"Oh, thank goodness! You got it! I'm saved! Never going back that Den again, no sir!
"No more for me! But have your own go at it... the password you require is 'spoon'. Be careful, Cyrus. And thanks again."