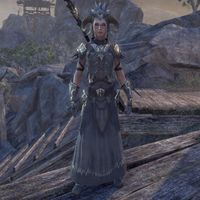 Arana, leader of the Wayward Guardians in her faction's attire

The Wayward Guardians were initially known as simply witch-rebels, the group is made up of the remnants of several Reachfolk clans which had been torn apart by the advancement of Gray Host into the Reach.

They are against Ard Caddach's reign, whose stubbornness they feel inadvertently is helping their enemies. When they gained the name of the Wayward Guardians, they also gained the reputation as defenders of the Reach. Operating outside of cultural norms, they arm themselves with Dwemer and silver armaments to help fight against the forces of the Gray Host.

This Elder Scrolls Online-related article is a stub. You can help by expanding it.
Retrieved from "https://en.uesp.net/w/index.php?title=Online:Wayward_Guardians&oldid=2246796"
Last edited on 29 November 2020, at 04:23