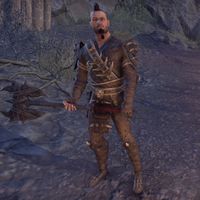 Tayfaern is a Reachman and devoted member of Arana's rebels. He can be found at multiple locations across the Reach.

On the first meeting, he approaches you carrying battlaxe in his hands:

He can be interacted with:

"These hills belong to the Reachfolk, rover. Turn around and go back the way you came, or I'll have your nose for a trophy!"
I'm looking for the witch-rebels. I need to speak to them.
"Witch-rebels, huh? That's just a label applied by the oppressors, don't you think?
Look, we have enough trouble with those Gray Host bastards and Caddach's soldiers. We don't need a curious outsider blundering around and getting in our way, too."
I'm hunting the Gray Host, too. I need to talk to your leader, Arana.
"You're a hunter? Truly? Sounds more like Caddach and his keep-witch getting up to more mischief.
You want to befriend the witch-rebels? Then prove it! The Gray Host has set up stockpiles nearby. Find out what they're storing and then we'll talk."
All right. I'll investigate the Gray Host stockpiles.
"The stockpiles were spotted to the east and south. If you can find out what the Gray Host is using them for, then we'll owe you a favor. And true Reachfolk never renege on a favor."
What do you expect me to find in these Gray Host stockpiles?
"If I knew for certain, there'd be no need to have you go and take a look, would there?
Probably supplies for their army, though what vampires and werewolves need is anyone's guess. Ritual items. Things for their harrowcraft. That's what I expect."

"You've seen those dark storms swirling over the Reach? The Gray Host calls them harrowstorms.
Their witches conjure them up using harrowcraft. From what we can tell, it requires all sorts of ingredients. Fetishes and alchemical mixtures mostly."

Should I destroy these supplies if I find them?
"No, bringing us the information is good enough for now. We're going to need a lot more warriors before we make that kind of move against the Gray Host.
Damn Caddach for ordering our people into the city. We need to fight, not hide."

Harrowcraft? Is that related to the harrowstorms?
(appears instead of What's harrowcraft? if you finished Western Skyrim Story quests.)

"Aye. Harrowcraft is what we call the rituals we've seen the Gray Host perform when they summon those cursed storms."

I spent some time researching harrowstorms in Western Skyrim
"Then you know the Gray Host has recruited Icereach witches to conjure up their storms. They use fetishes and alchemical mixtures in the rituals, so it makes sense they need a place to store those components."

I heard them call you witch-rebels. Are you a witch?

"Are you daft, outsider? Do I look like a witch to you?
A true with has power—hears the spirits, knows the old words, commands animals, things like that. Some use their power to help. Others use it to kill. Icereach witches are particularly evil."'

Ard Caddach made peace with the Gray Host. Why are you still fighting?

"There may be a peace of sorts inside Markarth, but out here we're outnumbered and fighting for our lives. Nothing unusual in that.
We won't let the Gray Host desecrate our land. And we won't let Caddach give it away just to avoid a little blood."'

After reading the letter he and Arana will approach you:
Arana: "This one, Tayfaern? Come, harrier. Give me your measure."

He can be interacted with afterwards:

After conversation with Arana he can be approached once again:

"All right, you got what you came for. Now go to the barrow and do what Arana asked."

After witnessing the short conversation between Count Verandis Ravenwatch and Arana he can be interacted with:

"Arana's our king, queen and clan-witch combined. So, mind your tongue or we'll cut it out."

After agreeing to perform the ritual he can be interacted with again:

"You heard Arana. We need to perform that ritual. Gather the components and return as quick as you can."

After returning with component needed for the ritual he can be interacted with again:

"Arana's ready for you.
Remember, thinblood, you'll be in the presence of our sacred spirits, so be respectful."

If he is interacted with directly before the ritual is started he may also repeat his previous words:

"Arana's our king, queen and clan-witch combined. So, mind your tongue or we'll cut it out."

After ritual is finished he can be talked to once more:

"First we're fighting vampires. Now we're working with them?
I trust Arana, but I hope she interpreted the signs correctly."

Before heading to investigate the places marked on the map he will say:

"Hircine speed your hunt, harrier.
Just keep Arana safe. If you take that responsibility lightly, you'll not only answer to me, but to all of the free clans."