The UESPWiki – Your source for The Elder Scrolls since 1995
< Online: Quests: Deshaan / Side Quests
Jump to: navigation, search

Arch-Mage Valeyn thinks his visions are somehow connected to the evil Magistrix Vox. Unfortunately, before he could learn more, something blocked his magic.

Immediately after completing School Daze, your conversation with the Arch-Mage of Shad Astula will continue:

"While you assisted my students, I had another vision. I see that your fate is fundamentally tied to the chaos-bringer, Magistrix Vox. However ...."
Tell me what you saw.
"Alas, I've seen nothing beyond the chaos-bringer's name! Something interferes with my fore-vision, blocking my efforts at every turn.
I suspect we are opposed by mighty forces beyond mortal ken."
What should we do?
"We must take appropriate measures! I'll gather the students and make sure the grounds are secure.
I'd like you to use the trapdoor to investigate the library vaults. I haven't heard from the librarian, and that fills me with nameless apprehension."
All right, I'll check the library vaults.' 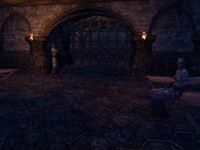 The trapdoor is nearby. Upon entering it, you'll only be able to explore a short distance before being caught in a magical trap. Your character will awaken in a jail cell, imprisoned alongside Lena, Tedras, and Hadmar from the prior quest. Speak to Lena to continue:

"Shad Astula's been overrun. The last of the Maulborn, from the looks of it--they must need more soldiers.
And they're getting them. They cast some kind of spell to enslave the students."
They're forcing the students to fight for them?
"That's what it looks like.
That spell didn't work on us--don't know why. We carried out the Arch-Mage's orders, but then the Maulborn caught us and threw us in here with you."
What did the Arch-Mage order you to do?
"When the trouble started, he gave us some arcane items and told us to find places to hide them. Then he went off on some mission of his own.
I'm glad you're awake. Can you get us out of here?"
I can try

Speak to Tedras by the cell door next.

"This is terrible! The Academy's in danger, the Arch-Mage is missing, and I'm locked in here with you!"
Who captured you?
"The Maulborn general himself.
One of the senior students recognized him. Said he was Darvasen—used to be the Arch-Mage's assistant!"
Where did Arch-Mage Valeyn go?
"Who knows? He muttered something about looking for Hadmar and a familiar.
What do you think the Maulborn want us for?"
Nothing good. Have you tried the gate?
"I was afraid to. There're guards out there!
Maybe you could check it. Discreetly."

Attempt to open the gate. You won't be able to, but you'll attract the attention of Familiar, which will approach the gate:

Valeyn's Familiar: "Back away from gate. Coming through!"

Once it forces its way in, it'll engage in a conversation with you:

"I open portal and we go find big Nord. Name Hatmeer! Or Hadmead? I forget. Mortals have dumb names.
No matter. Come, come. We go now. Big Nord hides in building next to where we appear."
What about Lena and Tedras?
"They stay here. Master says he doesn't want them to be dead yet.
I get them when time comes. No worry!"

"Hadmar's glad to see you. Arch-Mage said you'd be here soon. And here you are."
What's going on?
"Hadmar isn't sure. One moment I was walking to instruction hall, next moment--boom! Hadmar knocked on backside.
Woke up in here, with Arch-Mage standing over me. He said wait for you to show up. I waited, and you showed up!"
Did the Arch-Mage say anything else?
"Yes! He told me to set up my totem near big rock outside. Lena hid her lockbox high up on top of rock.
Lockbox is very important. We must find lockbox and bring it to Lena!"
Where is it?
"Just outside!
You use totem to reach the lockbox, while Hadmar stays on ground. Then we'll find Lena!" 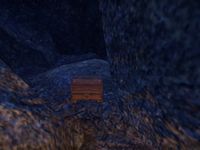 Head outside and locate Hadmar's totem, fighting your way through (or sneaking your way past) scamps and enthralled academy students as needed. The totem is located in front of a large rock behind the Administrative building. Use it to launch yourself onto the left side of the rock; the right side is too steep to climb. Lena's lockbox is hidden within a crevice in the rock. Once you interact with it, Valeyn's Familiar will teleport her up onto the rock right next to you. Talk to her.

"Wait, where am I? Why are we up so high?
That blasted banekin! It could've warned me!"
Nice to see you. Can you open this lockbox?
"The lockbox. Right. The Arch-Mage tinkered with my wand and told me to hide it up here.
That was just before Darvasen tossed me in that cell. I still can't believe the Arch-Mage's old assistant is the Maulborn general."
It sounds like the Arch-Mage has a plan.
"He said we'd need the wand, but he didn't say why.
Wait, I know! The Maulborn have occupied the library vaults and sealed the door. And what makes the best spell of unlocking? Burnt scamp hide and illusion dust, of course!"
Where can I get those ingredients?
"You can use my wand to scorch the scamps. And illusion dust is the residue of illusory monsters. With enough of each, we can prepare a spell to get us through to Darvasen.
We'll need Tedras, though. That spell is his specialty." 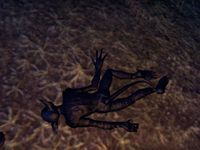 You'll need to collect five Scorched Scamp Hide and six units of Illusion Dust. Improved Wand of Finding will instantly fry any scamp you aim it at, with a short cooldown between uses; however, you can kill the nearby scamps through any means and still get scamp hides. All you need to do to kill scamps with the wand is put your line of sight over the scamp and fire away. Toasty! For illusion dust, you'll need to kill several illusory nix-hounds and Kagouti standing guard near the enslaved academy students.

For role-playing purposes, it may be valuable to know that the illusory monsters are positioned such that it is impossible to engage any of them without also engaging an enslaved student in combat. Valeyn's familiar is still accompanying you, and it may not attempt to spare students' lives even if you disengage them and flee after killing a monster.

Once you have the needed ingredients, get to the library door and activate it. Tedras will appear:

"About time you summoned me. I thought you'd leave me sitting in that cell forever."
I heard you were the best at opening locked doors.
"You heard correctly. If I had the right ingredients, that is. But getting them will be tricky, considering that the Maulborn occupy the Academy."
Way ahead of you. Here you go.
"Illusion dust and burnt scamp hide. Perfect! Just give me a moment and ... there we go!
I'll wait up here. You know, to keep your escape route clear. Now go find the Arch-Mage and put an end to that Darvasen."

Upon entering the library, you will need to fight your way through Maulborn soldiers, navigate the underhalls, locate General Darvasen, and kill him. Once he's dead, you'll need to approach and interact with an object called the Jagged Lens of Compulsion, to shatter it. Doing so will knock your character unconscious; you'll awaken in a room with Lena. An optional quest objective encourages you to speak to her:

"You're awake! Oh, I was so worried.
I'm so glad you're all right."
What happened?
"You shattered the Jagged Lens and broke the spell. The few Maulborn who were left were totally outnumbered, and they ran for it.
The Arch-Mage had us bring you up here. I've been watching over you. You know, as a friend."
So Shad Astula is safe again?
"Safe as gorapple pie. Thanks to you.
And you—you weren't even supposed to be here. I heard how you got your invitation. And now we're all alive because you broke the rules. I'll have to think about that."
You watched over me the entire time?
"Don't give me that look! I was worried about you, that's all.
Oh, and before I forget, the Arch-Mage wants to speak with you. He's right outside."

Head outside and speak to Arch-Mage Valeyn at the testing field, to the right of the stairs.

"Good to see you up and around.
I knew you'd be fine, but Lena wouldn't leave your side. You gave her a good scare."
The Academy is safe?
"Yes, though we lost a few students and instructors in the fight.
The fact that the lens was buried below the library vaults was one of our greatest secrets. Darvasen used that knowledge to aid the Maulborn."
So that's why the Maulborn attacked Shad Astula?
"Quite so. They're running out of loyal troops. When Darvasen told them about the lens, they saw it as the solution to all their problems.
If Darvasen could turn our students into soldier-slaves, the Maulborn would be back in business."
So that's it, then?
"For you, here, yes. But I don't need a vision to know that you still have unfinished business out there.
Anyway, I'd like to thank you. And there's one more thing."
What's that?
"The students you helped want to speak with you. They're waiting at the docks.
I think they want to say goodbye."

Head to the docks and talk to Lena to complete the quest:

"I wasn't going to let you go away without saying goodbye."
I'm done here. I have to return to Mournhold.
"I know. You have things to do. Important things. We just heard about everything you did before you arrived here.
But we didn't want you to forget us."
I won't forget you.
"We wanted to give you something. It's not much, but maybe it will help you remember the Academy.
Now where did I put it?"
You don't have to give me a present.
"Don't be silly. Ah, here it is.
Take my wand. It worked better for you, anyway. Remember me when you use it."