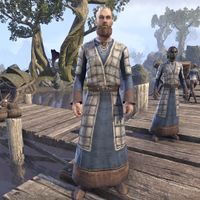 Hadmar the Thin-Boned is a Nord student found initially at Mournhold, and then at the academy of Shad Astula. He is afraid of heights. Before attending Shad Astula, he used to get "beaten with rakes" whenever he failed to complete a task. Hadmar speaks Tamrielic as a second language, occasionally skipping words and inconsistently referring to himself in the third person.

Prior to gaining access to Shad Astula, you can hear the following conversation at the docks:

Lena Dalvel: "I've been waiting for this my entire life."
Tedras Relvi: "Me, too, Lena. I want to learn how to unleash my inner powers."
Hadmar the Thin-Boned: "Ah, but before we unleash we must learn to control."
Tedras Relvi: "Of course, Hadmar. Whatever you say, Hadmar."

When spoken to in Mournhold, he says:

"Control. We must learn control."

After arriving at Shad Astula, the following exchange can be overheard:

Speaking to Hadmar after this conversation:

"Tedras must be strong if he hopes to get through his teachings. Let us hope they do not send him on many boats."

During this quest, you will be sent to help Hadmar, Lena and Tedras with their entrance exams. You will find Hadmar at the testing field by a large rock. He is in the company of several peculiar Students.

"Asked me to do one simple thing. Bring student-rats back to instructions hall. But Hadmar can't do anything right."
Do you need some help?
"My spell went wrong. The instructor said to round up the little ones, bring them back safe, and we'll get them fixed.
But, well, one got away and climbed on top of that big rock. Oh, Hadmar is so ashamed!"
Ashamed of what?
""Hadmar is scared of heights! Oh, why did little rat climb so high?
I crafted a totem. Makes a helper fly up to get rat. But no one wants to be Hadmar's helper."
I'll help you. How does the totem work?
"You would be helper? Thank you!
Face big rock in front of Hadmar, activate totem, then climb and grab nice little rat. But be careful. If you point the wrong way, you'll fly someplace wrong."

After retrieving the rat from on top of the rock:

"Is little friend safe?"
Perfectly. Here's your friend.
"Oh, little rat is safe! Now Hadmar won't get beaten with rakes, like at home.
Good, good, good. I'll take little friends back to get fixed up right away."

Speaking to Hadmar after assisting him:

"Hadmar takes little friends back now. I'm sure they can be turned back into big-friend students."

"Hadmar's glad to see you. Arch-Mage said you'd be here soon. And here you are."
What's going on?
"Hadmar isn't sure. One moment I was walking to instruction hall, next moment—boom! Hadmar knocked on backside.
Woke up in here, with Arch-Mage standing over me. He said wait for you to show up. I waited, and you showed up!"
Did the Arch-Mage say anything else?
"Yes! He told me to set up my totem near big rock outside. Lena hid her lockbox high up on top of rock.
Lockbox is very important. We must find lockbox and bring it to Lena!"
Where is it?
"Just outside!
You use totem to reach the lockbox, while Hadmar stays on ground. Then we'll find Lena!"

"Hadmar will stay here for a while. It's not safe out there and I don't want to have my mind controlled. No, no, no."

At the end of the quest, you must go down to the docks and say goodbye to your friends at the Academy.

"Hadmar's glad you're all right. I'm proud to call you my friend."