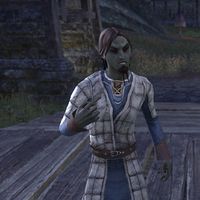 Tedras Relvi is a Dunmer student found initially at the docks in Mournhold, then at the academy of Shad Astula. He can usually be found in the company of Hadmar the Thin-Boned and Lena Dalvel.

Prior to gaining access to Shad Astula, you can hear the following conversation at the docks:

Lena Dalvel: "I've been waiting for this my entire life."
Tedras Relvi: "Me, too, Lena. I want to learn how to unleash my inner powers."
Hadmar the Thin-Boned: "Ah, but before we unleash we must learn to control."
Tedras Relvi: "Of course, Hadmar. Whatever you say, Hadmar."

When spoken to in Mournhold, he boasts.

"The instructors think they'll be able to contain my innate power. Ha!"

After arriving at Shad Astula, the following exchange can be overheard:

Speaking to Tedras after this conversation:

"Just leave me alone, would you?"

During this quest, you will be sent to help Hadmar, Lena and Tedras with their entrance exams. You will find Tedras by the eastern pond, fishing. Speak to him and see what he might need help with.

"What rubbish! Fish magic from a pond? Vivec's buttocks, what does that even mean?"
Is there anything I can do to help?
"I'm not helpless, you know. I can do this.
Argh! Never mind. I give up. I'm not getting sent home over some stupid fish that doesn't exist. You want to help? Fine."
What can I do?
"Well, you can either fill this pond with fish so I can actually catch one, or figure out what these orbs do.
They gave me a book, but it just contained some stupid riddle. I threw it on that table over there."
You didn't try to figure out the riddle?
"What am I, a child? I'm going to be a commander in a House army, or maybe an advisor to the Pact leaders! They should have just given me a spell I could cast."

After solving the riddle, a giant crocodile comes out of the pond:

Speaking to him after Old Snapper is dead:

"I think I got it from here.
Er, thanks for the help. Maybe I'll get a chance to cast some spells after all."

After getting knocked out in the Underhalls, you wake up in a cell with Lena and Tedras. After speak with Lena, talk to Tedras.

"This is terrible! The Academy's in danger, the Arch-Mage is missing, and I'm locked in here with you."
Who captured you?
"The Maulborn general himself.
One of the senior students recognized him. Said he was Darvasen—used to be the Arch-Mage's assistant!"
Where did Arch-Mage Valeyn go?
"Who knows? He muttered something about looking for Hadmar and a familiar.
What do you think the Maulborn want us for?"
Nothing good. Have you tried the gate?
"I was afraid to. There're guards out there!
Maybe you could check it. Discreetly."

After you check the gate, Valeyn's Familiar arrives, having tormented the guard into fleeing for her life.

The banekin approaches the gate.

"We have to trust the Arch-Mage. Right?
Go with his familiar. We'll come as soon as you call us. Honest."

After retrieving the ingredients for the open door spell, you must meet up with Tedras by the trap door to the Underhall.

"About time you summoned me. I thought you'd leave me sitting in that cell forever."
I heard you were the best at opening locked doors.
"You heard correctly. If I had the right ingredients, that is. But getting them will be tricky, considering the Maulborn occupy the Academy."
Way ahead of you. Here you go.
"Illusion dust and burnt scamp hide. Perfect! Just give me a moment and … there we go!
I'll wait up here. You know, to keep your escape route clear. Now go find the Arch-Mage and put an end to that Darvasen."

"I'll make sure no one follows you.
I'm tired of sitting on my hands. Time for some action."

At the end of the quest, you must go down to the docks and say goodbye to your friends at the Academy.

This Elder Scrolls Online-related article is a stub. You can help by expanding it.
Retrieved from "https://en.uesp.net/w/index.php?title=Online:Tedras_Relvi&oldid=1980929"
Last edited on 8 July 2019, at 20:09