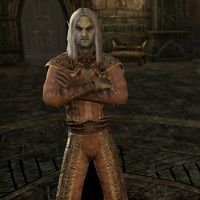 Varon Davel is a Dunmer assassin working for the Morag Tong. He is first found in Narsis, where he is masquerading as an advisor for Councilor Ralden. He, along with Ralden, enlist your help in locating kidnapped villagers. It is later revealed that he is working with Naryu Virian, who he sent on the same mission. After it is revealed that one of Councilor Ralden's inner circle was secretly working for the Maulborn, Varon reveals that his primary objective was to find the source of the Llodos Plague and eliminate it. 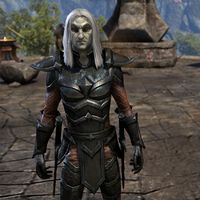 Varon Davel: "You're back. We need to talk."

"Ralden isn't here. He and Giron left some time ago.
And Giron's connection to the Maulborn makes me a little concerned."
How do you know that?
"Let's just say I'm well informed. I've suspected the connection for a while and his abduction of the councilor confirms it.
My associate and I tend to avoid situations not covered by our contracts. Still, we might be able to assist one another."
Where's Giron?
"I don't know. I only know what the reports tell me.
Giron probably took Ralden somewhere secluded, far from prying eyes."

"Narsis is sealed. Villagers are missing. Crates of Llodos plague arrive in the night. Now you discover the plague intensifies when it festers inside a corpse.
Makes you wonder about Giron's plan, doesn't it?"
Any ideas on how to find Giron and Ralden?
"Reports tell me that a group of villagers have decided to take matters into their own hands. I don't condone their actions, but they might have information.
Find the Argonian called Slips-Through-Fingers. She can lead you to them."
Why would she help me?
"I have a feeling she's going to want your help. Tales of your exploits already spread through Narsis. Find the Argonian, and I'd wager that before you say a word, she asks you to meet with her companions."
I'll find Slips-Through-Fingers.

Speaking to him after this conversation is over:

"I don't believe we have anything else to discuss.
You're on your own. Good hunting."

"Any sign of Giron or Ralden?"
I met someone who knows where they are.
"That's good news. I also heard from my associate, Naryu Virian. We may have finally gotten a few breaks in this sordid situation."

"Any sign of Giron or Ralden?"
I met someone who knows where they are.
"That's good news. I've also had a slight change of plans."

"Naryu told me you found a note at the Maulborn camp. That might be a link to the creator of the Llodos plague.
This drastically changes our stance on the situation here."
I found many things at the camp.
"I care only about a name and a location. Such information brings me closer to fulfilling my current contract.
Because of this, I've decided to offer some assistance."
What kind of assistance?
"I'll gather the House Hlaalu guards and follow you. Whatever you find, the guard will be there to back you up.
Now go. Find your ally and save the councilor. I'll catch up with you soon."
I'll see you later.

Speaking with him again:

"I'll gather the guards and follow in your path.
Now go. Find your ally and let's finish this."
How do you know all of this?
"I've been here for weeks, playing the political games common to all Dark Elf kinhouses. I've decided I hate such games.
But you'd be surprised what you can learn if you just stand back and listen."
Why didn't you move against Giron earlier?
"Giron isn't our target. We're after the one who created the Llodos plague.
I decided to reach out to you and provide a modicum of aid. Your actions may lead me to the one I seek."
Who are you, really?
"Right now, I'm your very best friend. Work with me, and we'll make sure Narsis isn't destroyed by the Maulborn."
Have you figured out who the Maulborn really are?
"Well, they're certainly not the altruistic organization they pretend to be. It's definitely a militaristic cult, but who controls them is still unclear. I'm sure they're connected to this Vox mentioned in the notes you discovered."
And who's Vox?
"No idea. We're still working on that."

Varon Davel: "There you are. Good to see you made it."

If you completed A Timely Matter:

"Still alive, I see. I suppose that justifies Naryu's confidence in you.
Did you find them? How's Ralden? Are they inside?"
Ralden's alive, along with many of the missing people.
"You actually succeeded? Well done.
I gathered the guards and came as quickly as possible. A contingent has gone into the ruins to deal with the remaining Maulborn. What happened in there?"

If you completed Ratting Them Out:

"Still alive, I see. I suppose that justifies Naryu's confidence in you.
Did you find them? How's Ralden? Are they inside?"
Ralden's dead, but many of the missing villagers are still alive.
"I see. Ralden was a good man who cared for his people. He should be remembered that way.
The guards are dealing with the Maulborn in the ruins. What happened in there?"
Giron used captured villagers to strengthen the Llodos plague. He bled them into the lake.
"So that's why he wanted Narsis locked down. He wanted a ready supply of plague carriers.
House Hlaalu will make sure no one drinks from the lake until it's cleansed."
Anything else you need from me?
"Narsis is safe, at least for now. We'll get these people to the healers. You should get some rest. I fear things are about to get more complicated.
The Maulborn are more dangerous than we thought. I'm sure your help will be needed again."

Exiting the conversation and entering it again:

"You did some fine work against the Maulborn. Fine work. And without a contract! I'm somewhat impressed."
Is there anything else you need me to do?

"We'll make sure these people receive care.
When you have a moment, return to Narsis and speak to Naryu. She has a lead on the name you uncovered. I'll join you as soon as I can."
Is this about the creator of the plague?
"Yes. I had Naryu investigate the evidence you retrieved from the Maulborn camp. She discovered something she wants to share. Find her back in town."
I'll go speak to her.

Speaking with him after returning from destroying the Maulborn's wards:

"There's war, and then there's just slaughter.
The Maulborn fight without honor. I don't expect we'll be taking any prisoners."
It's good to see you again.
"I told you we'd be right behind you. I'm truly beginning to understand what Naryu sees in you. You certainly know how to get things done."
Naryu? Where is she?
"Oh, she's out and about. Like you, she's out doing what she does best. Now, talk to the captain and let's get on with things."

"I warned that fool Diiril not to go on ahead.
If he's not a husk yet, he's probably a feast for one. That plague moves like lightning."
Where did Diiril go?
"He took some troops to the southern side of the Gorge. He's looking for the Maulborn leader. The alchemist.
I don't know if he made it that far or not."
I'll find him. Get to safety.
"Don't need to tell us twice. We'll stay on high ground until the plague dissipates.
If you find Diiril and he's turned ... do what you have to. Understand?"
I'll take care of it.

"Diiril was headed for those ruins on the south side of the gorge.
Naryu and I will stay up here until the plague blows away."

"With the death of the alchemist Merdyndril, our contract is fulfilled.
I'm not sure we could have accomplished it without you."
What will you two do now?
"On to our next assignment! We don't get a lot of down time. We're always on the job, always watching.
Are you heading to Mournhold now?"
Why would I go there?
"Someone has to tell Ordinator Kilao what happened here. You appear to be available for the job.
I'm sure we'll run into each other again. Hopefully, it won't be because your name's on a contract."
I can't wait.