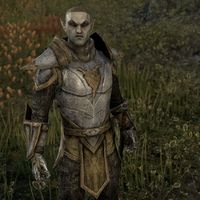 Captain Diiril is a Dunmer soldier in charge of the Hlaalu forces found in the Obsidian Gorge.

"If you're planning to use the pass to Mournhold, find another route. It's not safe."
What's going on?
"The Maulborn have overrun the traders' camp and occupied the pass. By authority of House Hlaalu, this area is closed. It's a death trap."
What's your plan?
"We sent in some scouts to assess the situation, but they haven't returned. I don't want to march in there blindly, but we can't wait much longer!"
I'll locate your scouts and find out what's happening.
"The pass is too important to allow it to fall into the Mauborn's hands."
What's so important about Obsidian Gorge?
"It's the primary trading route between Mournhold and the west. It's also home to a trader's camp. Every caravan that comes through this part of Deshaan depends on that camp."
Why have the Maulborn occupied the pass?
"That's an excellent question. Harassing caravans seems to go against their usual method of operations, doesn't it?"

"Good, you're still alive. Scout Mamyne told us she sent you into this cave.
Varon says he knows you from Narsis. He and his ally have offered their assistance."
What do you need me to do?
"We have to proceed cautiously. I don't want any more of my soldiers getting infected.
But the Maulborn have to be dealt with. For good."
I destroyed the arcane wards protecting them from the plague. That might help.
"Ah, that changes things.
We've spotted the plague shipment they planned for Mournhold. I want those crates destroyed, but I need my troop at a safe distance when it happens."
Any ideas?
"Always. A cliff overlooks their loaded wagons. And I've got archers up there.
Get to Naryu Virian. Tell her to have the archers shatter the crates from above. We'll see how the Maulborn like being exposed to their own plague."
I'll protect the archers while they do their work.
"Good idea. Exactly what we need.
On your way, then. That tunnel will take you to the top of the cliff."

"Varon and I will work on a cure, but meanwhile I need you to destroy the shipments. We can't let the plague reach Mournhold.
Rendezvous with the archers. They're outside the top of the cave, on an overlook."

"By Ayem—you've run through a gauntlet of plague and death, yet you aren't sick. How?"
I'm not quite sure.
"We'll consider it a blessing of the Tribunal for now, and leave it at that.
The Maulborn who haven't fallen to the plague are in retreat. We've just one final matter to attend to."
What's that?
"We've got Merdyndril, the alchemist who created the Llodos Plague, cornered in these ruins. We need to capture him and find out how he did it.
With you at our side, we can't fail."
Then what are we waiting for?
"That's the spirit! We're right behind you.
Remember, we have to find out how the plague was made. Then we can get to work on making a cure. Let's go."

Speaking with him inside the apothecarium:

"Let's get this over with."

Sevos and Urene are turned into plague husks, and you and the Captain need to kill them. Merdyndril exposes you two to a stronger strain of the plague when they're dead.

Voice of Merdyndril: "You resist my plague? Let's try a stronger version!"
Captain Diiril: "No, not that! Arrhhh!"

Captain Diiril then transforms into a plague husk, and you must kill him.