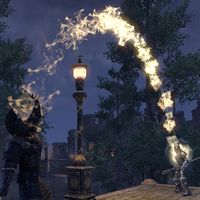 Solar Flare deals Magic Damage to an enemy, and increases the damage of your next attack. The Solar Barrage morph changes this to an instant-cast, close-range attack. Or you can choose Dark Flare, which reduces both your target's as well as other nearby targets' ability to heal (though only your primary target actually takes damage).