This article is about the condition. For the person, see Projection (person). 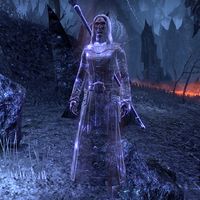 The Projection of Vanus Galerion

Projections are translucent echoes of NPCs. They usually appear when a character who wields magic would like to send a message. The Projection of Vanus Galerion is a projection that serves such a purpose. Some projections, such as the Shadow of Seeks-the-Night, can allow whoever controls them to see everything the projection sees, and have their master speak through them to someone on the scene.

A full list of projections can be found here.

This Elder Scrolls Online-related article is a stub. You can help by expanding it.
Retrieved from "https://en.uesp.net/w/index.php?title=Online:Projection&oldid=2240223"
Last edited on 16 November 2020, at 09:05