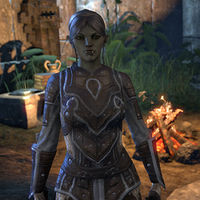 Orthuna is an Orc member of the Merethic Society found in the ruins of Rulanyil's Fall.

"What a rotten day.
The entire Merethic Society collection is stored in these ruins. And the Worm Cult gets to have their way with it all."
Tell me about this collection.

"Every piece the Merethic Society admits into our compilation must have aesthetic or historic significance, and elevate the prestige of the collection as a whole.
We leave the archaeologists and the Mages Guild to fawn over potshards [sic] and jewelry."

What is the Merethic Society?

"We're collectors of lost relics. Some items we trade for on the black market, other we procure directly from ruins. We take our name from the Merethic Era, the legendary age between the creation of Nirn and the start of the First Era."

When you return to Orthuna with the relics, she is curious.

"What's that in your hand there? Seems you've been busy."
Dulini sent me to retrieve these.
"Let's see what you have here.
Ah, very good. I'm glad these survived. You and Dulini have done Tamriel a great service by returning these to us."
"We'll rebuild the collection. You've done the Society, and by association, all of Tamriel, a great favor."

Afterwards, you can ask Orthuna to tell you about the collection and share details about each relic.

Can I ask you about the items I recovered?
"Yes?"
I'm curious about that item I recovered, the horn of Borgas.

"Borgas was a High King of Skyrim during the First Era.
He died during the Wild Hunt of 369, in Valenwood and carried the Horn at the moment of his death. Though the Horn is in pristine condition, the Wild Hunt left no trace of Borgas's body."

"Aiden Direnni was an Altmer folk-hero. According to history, he led the Direnni Clan of High Rock against the Alessian Order of Cyrodiil.
He appears in myths as the last king of a heroic line, a champion in the fight of Mer against Men."

"Mansel Sesnit ruled Yokuda centuries before the Redguard came to Tamriel.
His governance was brief, but eventful, laying much of the structural groundwork later Redguard rulers would utilize."

What is the compass of the Lost Fleet?

"The Lost Fleet, or the All Flags Fleet, was an armada sent by the Colovian emperor, Bendu Olo, to eliminate the invading Sload. The Sload were defeated, but much of the fleet vanished without a trace.
Save this compass."

During The Dead King, when you return with Nanwen, she'll comment:

Orthuna: "Nanwen! What in Oblivion? You look … good. Endarwe will be thrilled to see you!"

This Elder Scrolls Online-related article is a stub. You can help by expanding it.
Retrieved from "https://en.uesp.net/w/index.php?title=Online:Orthuna&oldid=2669211"