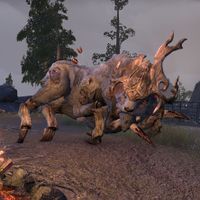 Old Snagara is an ancient echatere being held at the Poacher's Encampment in Wrothgar. She serves as the world boss for the area, and will break out of her cage to challenge you after you defeat three waves of poachers.

Old Snagara has been a lucrative source of profit for the poachers, as she is oddly fertile. There is a note near her enclosure that details how to care for her, and that every now and then, she pops out another echalette. The echalettes in small cages around the encampment may be her spawn.

She has a chance to drop the Onyx Accent Stones antiquity lead for the Ring of the Pale Order.

Bite
A basic melee attack executed if the player is close enough to the boss. Deals a moderate amount of physical damage.
Rear Attack
The echatere rears it's head back and deals a quick blow to the player should they be close enough. Can be dodged by moving away from the boss.
Vile Spit
The echatere spits a poisonous substance from it's mouth at the player, dealing a moderate amount of poison damage. Can be mitigated by blocking or dodged entirely by a well time dodge roll. If she is enraged, she can use this attack twice in a row.
Exude Poison
The echatere stands in place and shakes vigorously, releasing noxious fumes over a moderately sized portion of the ground. The AoE persists for a long time, making maneuvering through the battlefield tedious if they begin to pile up.
Tremors
The echatere slams it's powerful limbs on the ground, sending forth three shockwaves. If she is enraged, the number of shockwaves increases to four.
Reinforcements
The Rustler poachers periodically join the battle in groups of four or five to aid Snagara. The most dangerous ones are the Rustler Fear Mages due to their fear CC effects. If left unchecked, the Rustler Healer can also restore the health of the boss, prolonging the fight.
Enrage
The echatere runs towards one of it's captive offsprings. Seeing this enrages it for quite some time, doubling the damage of it's aforementioned attacks.

There are several Achievements associated with this creature:

This Elder Scrolls Online-related article is a stub. You can help by expanding it.
Retrieved from "https://en.uesp.net/w/index.php?title=Online:Old_Snagara&oldid=2566043"